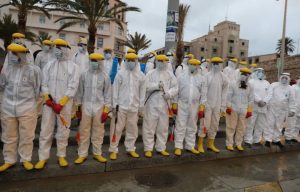 Forty western Libya Municipalities welcomed the anti-Coronavirus emergency budgets allocated to them yesterday by the internationally recognized Libyan government based in Tripoli and led by Faiez Serraj to fight the Coronavirus (Covid-19).

The LD 75 million emergency budget was distributed to a total of 119 municipalities/local administrations according to population density. They ranged from LD 5.5 million for the city of Benghazi, LD 2.6 for Misrata, LD 2.2 for Hay Al-Andalous, LD 2.1 for Busleem to LD 119.000 to the smallest municipality.

Earlier in the week a group of municipalities had criticised the Serraj administration for not living up to its promises made at their joint 17 March meeting. Some mayors had called for the resignation of the Health Minister and his Deputy. A public petition has been circulating social media to that effect. There have been unconfirmed reports that the Health Minister has actually handed in his resignation letter to Prime Minister Faiez Serraj, but no official comment has been forthcoming on the issue.

The allocations were disbursed to a total of 119 municipalities/local administrations according to population density. They ranged from LD 5.5 million for the city of Benghazi, LD 2.6 for Misrata, LD 2.2 for Hay Al-Andalous, LD 2.1 to Busleem to LD 119.000 to the smallest municipality.

However, today, at least two Municipalities, Tripoli Central and Zuwara, announced that they would not be taking up the Serraj governments allocations.

Tripoli Central Municipality announced yesterday that the amount was too little and had arrived too late. It announced it was launching a fund-raising campaign and would continue to finance services – as it has been all this time – through donations. It said that it was not a Health Ministry and could not be expected to take the work of a health ministry with such a minimal amount.

Zuwara Municipality also rejected the emergency budget allocated to it today and it too announced that it was setting up a donations fund to deal with the Corona epidemic.

In a televised statement, it said it was astonished at the mechanism used to estimate the amounts allocated to Municipalities. It questioned how it was allocated LD 469,000 for an area of 80 square kilometres stretching from the western Libyan border with Tunisia including the largest land border crossing in the country, Zuwara International Airport, the port of the Mellitah gas complex and Zuwara commercial and fishing ports.

It added that this amount is not enough to run an institution, let alone an emergency budget to spend on a vast area extending from Mellitah to the Tunisian border crossing.

Meanwhile, the Tripoli government announced today that it was ceding its powers for the provision of health services to municipalities.

Further to yesterday’s increase of Coronavirus cases in Libya to 10, the National Centre for Disease Control (NCDC) refuted media reports that Libya’s first patient had either recovered or had left hospital.

This flies in the face of reports from his family members that the patient had been released from the Al-Hadba Al-Khadra hospital having recovered.

It will be recalled that the patient was a 73-year-old man who had returned from a visit to Saudi Arabia on 5 March. His case had been announced on 24 March. Initially, the man was reported to have hailed from the western Libyan town of Aljmail. Subsequently, local media and his brother revealed they were a well-known family from Tripoli.