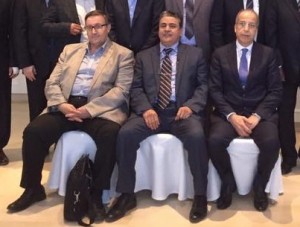 The Governors of the two Central Banks of eastern (Hibri, left) and western (El Kaber, right) Libya at a ”unification” meeting in Tunis in 2016 (Photo: social media).

In the latest instalment, the catalyst seems to be a call by U.S. Ambassador on 31 March for ‘‘Libyan economic institutions and decision makers attempt to come together’’ and welcoming ‘‘all attempts to improve coordination among economic policy leaders, including through the convening of the Central Bank of Libya (CBL) board of governors and direct communication between the Ministry of Finance and the CBL’’

Ensuring the timely distribution of public sector wages and prompt allocation of funding for the National Center for Disease Control (NCDC), municipalities, and other Libyan stakeholders to prevent the spread of and respond to COVID-19, are vital to promote the health of all Libyans.

In this regard, the Ambassador welcomed all attempts to improve coordination among economic policy leaders, including through the convening of the Central Bank of Libya (CBL) board of governors and direct communication between the Ministry of Finance and the CBL, in order to sustain a whole-of-government response to this potential health crisis.’’

”the Ambassador welcomed all attempts to improve coordination among economic policy leaders, including through the convening of the Central Bank of Libya (CBL) board of governors”

The statement, probably preceded by direct communications between Ambassador Norland and Serraj, may have led to Serraj releasing his statement yesterday.

Serraj called for the CBL board members to rise above their political differences to hold an urgent meeting, saying as he had done repeatedly on previous occasions, to be held on this occasion, by videoconferencing, of the unified CBL board – in view of the exceptional circumstances brought about by the Coronavirus crisis.

He said he wanted to protect this vital sovereign institution from the negative effect of political division as shown by its support by UN Security Council resolutions.

He called on Tripoli CBL Governor Saddek El Kaber to end his unilateral decision-making and dominance over monetary policy and imposition of his personal point of view, and who without warning or announcement, stopped the country’s banking transfer and clearance system (with banks in eastern Libya) and delayed the monthly payment of salaries despite receiving their monthly demand from the Finance Ministry. This delay caused huge damage to Libyan citizens in a country where the majority depend on salaries.

He warned that if action is not taken quickly, the country could be in a very dangerous economic, living and health situation.

He said the unified board should meet urgently in order to implement all its legal authority and take up its role to achieve its goals and put in place monetary, development and banking policies.

Enlisting international support, Serraj called on UNSMIL to provide the needed technical support to facilitate this unified CBL board meeting and support its outcomes.

”Serraj called on UNSMIL to provide the needed technical support to facilitate this unified CBL board meeting and support its outcomes.”

The CBL replied immediately to the Serraj accusations and hit back at his ‘‘unilateral’’ decision-making jibe by saying that Serraj had issued his statement on his own without the support of the other two Presidency Council members.

The CBL called for an urgent need to distance it from Libya’s political polarization. It recalled that it comes under the authority of the legislature and its laws and the Skhirat 2015 Libyan Political Agreement.

The House of Representatives is, conveniently for El Kaber, split. It had sacked El Kaber on two previous occasions – which he ignored. He insists he be replaced through the LPA mechanism. By this, El Kaber is informing Serraj that he has no direct mandate over the Tripoli CBL.

The CBL said that he took the initiative in 2015 in calling for the reunification of the CBL board – but only after an audit of the accounts of both the Tripoli and eastern branch. It repeated that it is committed to the UN Security Council resolution to audit both banks – as the basis for any reunification.

The Tripoli CBL ”repeated that it is committed to the UN Security Council resolution to audit both banks – as the basis for any reunification.”

It pointed out that it has provided all the money requested by the Ministry of Health in support of its anti-Coronavirus efforts.

With regards to Serraj’s accusation that it failed to pay salaries, the CBL pointed out that the it had paid the salaries for January, February and March this year after the 2020 budget was approved on 16 March. It reminded that it had called for the budget to be prepared in September 2019 and for it to be approved by the end of 2019 – as per the LPA.

The CBL blamed the Serraj administration for failing to solve the political crisis that led to the stoppage of oil production and exports which has negatively impacted all Libya’s state institutions. It considered this as the main cause of the country’s financial and economic crisis – which aggravated living conditions in Libya.

With regards to Serraj accusation that it closed the clearance and transfer system with eastern banks, the CBL said that this was a precautionary measure due to the eastern CBL Governor, Ali Hibri, ‘‘hacking’’ some public accounts.

As for Serraj’s accusation that the CBL stopped disbursing the sale of foreign currency, the Tripoli CBL said that this was an absolute necessity due to the stoppage of oil production and exports and in order to ensure that the country’s financial sustainability amidst an exaggerated demand for foreign currency for the purpose of speculation and profitability. It revealed that it was on the verge of resuming foreign currency sales – pending Serraj amending the foreign currency sales surcharge – as he had previously agreed.

The CBL pointed out that during 2014, 2015 and 2016 it had undertaken a package of measures to address the oil production and export stoppages and crises at the time which had helped in achieving financial sustainability for the country.

Finally, in the face of the Coronavirus pandemic, the CBL called on all Libyan public institutions to unite and intensify efforts to face the crisis.

It will be recalled that Saddek El-Kaber was first dismissed from his post back in April 2015. The decision (No. (14) of 2015) to sack him was signed by Ali Hibri, who at the time represented the only internationally recognized government and parliament, the House of Representatives (HoR).

Secondly, the Skhirat Libyan Political Agreement (LPA) stipulates that all HoR decisions taken since 2014 would be reviewed by a joint committee. This would include the decision to dismiss Kaber. No joint committees have met or reviewed the CBL Governorship yet.

CBL law does stipulate that a Board meeting should be held every month and that a public call for such a meeting needs to be made. A Board meeting can be called by the Governor, his Deputy or any three Board members.

It is also important to bear in mind that while the Governorship of the CBL is contested between the two Tripoli-based and Benghazi-based ‘‘Governors”, the CBL Board of Directors is not.

Its seven members are uncontested. Four members are based in or aligned to the east and three were based in or aligned to the west. One western-based member resigned in 2016 for personal reasons, and his position remains vacant. This leaves only two CBL Board members active in the west. Many believe that it is this minority of members aligned to Kaber that discourages him from holding a board meeting where he would be outvoted on policy and maybe even removed from his job.