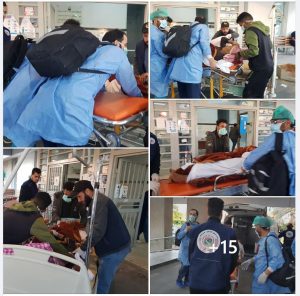 The Al Hadba Al Khadra hospital had to evacuate some of its patients after it was hit by missiles yesterday attributed to the Khalifa Hafter forces (Photo: Tripoli Ministry of Health).

Multiple parts of Tripoli were subjected to a barrage of 40-60 missiles, including what were described as Grad missiles yesterday. Miraculously, no deaths were reported. Mitiga airport and the Al-Hadba hospital were also hit. The Tripoli Ministry of Health and UNSMIL condemned the shelling. The attack is attributed to the pro Khalifa Hafter forces.

A fire broke out in the hospital’s car park after a car was hit. The main building suffered some damage. The hospital was forced to evacuate some of its more serious cases.

The Tripoli Ministry of Health sent out an urgent appeal yesterday to all local and international humanitarian organizations to move quickly to stop these ‘‘criminal attacks on the capital Tripoli, which target health institutions, most recently this evening, where the Al-Hadba Al-Khadra General Hospital was targeted by missiles. This caused the hospital’s power generator to cut resulting in the evacuation of patients, including those with virus “Coved 19”, which exacerbated the humanitarian health situation in Libya’’.

Meanwhile, UNSMIL Humanitarian Coordinator Yacoub Al-Helou said he was shocked yesterday by the targeting of the Al-Hadba Al-Khadra General Hospital:

‘‘At a moment when people in Libya needed only a safe house and functioning medical facilities, we are shocked by the news of another attack on a hospital. I was struck by a heavy bombardment targeting the “Green General Hospital” in Tripoli today, injuring at least one health care worker and damaging the fully functioning medical facility. This attack is a clear violation of international humanitarian law.

The repeated calls by the United Nations and the international community for a cessation of hostilities have been totally ignored as the fighting intensifies. This is unacceptable at a time when health-care workers and health workers are critical to our response to a global pandemic. The 400-bed Green Hospital was a healthcare facility dedicated to receiving Coved-19 patients.

Such a reprehensible blow that caused significant damage to a much-needed medical facility is inexcusable. As of March 2020, a total of 27 health-care facilities had been affected to varying degrees by close engagements, including 14 health-care facilities closed and 23 others at risk of closure due to the shifting front lines. It is catastrophic that the January truce, the recent call for a humanitarian truce, welcomed by both the Government of National Accord and the Libyan National Army, and even the UN Secretary-General’s call for a worldwide cessation of hostilities, particularly in the midst of the current Coved-19 pandemic, continue to be ignored. This reckless escalation must therefore be stopped so that health authorities and aid agencies can respond to the Coved-19 pandemic and continue to reach people in need of urgent humanitarian assistance.

The Libyan health authorities, along with the United Nations and our humanitarian partners, are in a race against time to contain the spread of the virus. If Libya is to have any chance of overcoming the Coronavirus, this ongoing conflict must cease immediately’’.

It will be recalled that the forces defending Tripoli and aligned to the internationally recognized Libyan government based in Tripoli had been conducting proactive attacks on the Khalifa Hafter led Libyan National Army (LNA) and its aligned forces.

These included an attack on the Wittiya airbase and in the south east of Misrata, a cargo plane delivering arms in Tarhuna and fuel tankers. Analysts say that Turkish intervention on the Tripoli side has meant the Hafter forces had lost air superiority and has shifted the balance of the fighting in Tripoli’s favour.

This, they believe, has led to the Hafter forces into launching increased salvos into Tripoli, often discriminately, in an attempt to rebalance the fighting.

A so-described military group, attributed by Tripoli residents to the Hafter forces, had also yesterday damaged part of the Man-Made River water project causing a stop of water flow to the capital.

Libya’s Coronavirus cases: One new case, one recovered and one recovering – brings total positive cases to 19