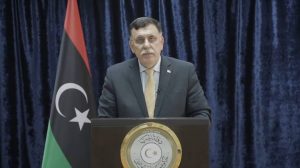 On the occasion of the first-year anniversary of Khalifa Hafter’s attack on Tripoli on April 4th, 2019, the internationally recognized Prime Minister of Libya, Faiez Serraj, gave a forty-minute televised speech last night.

For once, rather than the usual wooden, ineffective and unemotional pre-recorded clips broadcast on previous occasions, Serraj spoke unscripted, referring to his notes only to self-prompt.

Serraj covered the war on Tripoli, the international community, the anti-Coronavirus effort, the media, the oil stoppage and corruption. However, the majority of the speech was not on Hafter’s war on Tripoli – as the speech was billed – but was about his war with the Tripoli Central Bank of Libya (CBL) and its Governor Saddek El Kaber.

Serraj paid tribute to the forces aligned to him defending the capital against Hafter’s Libyan National Army (LNA) for their brave efforts. He said that the war was a waste of Libya’s money and that all the needs of his aligned forces have been met. He attacked Libyan media accusing it of treason for lack of solidarity, following agendas and in trying to cause a split between him and the defending forces.

He accused Hafter of being a fool (Ahmuq) with evil ideas of cutting the water supply to Tripoli and shelling civilian sites, including the Al-Hadba Al-Khadra hospital over the last two days.

The Tripoli Central Bank of Libya

However, Serraj saved his most severe criticism for the Tripoli CBL and its Governor Saddek El Kaber. After years of barely concealed briefings to traditional and social media, including the leaking of letters exchanged between the government and the CBL, Serraj launched a blistering attack on his erstwhile ally with more ferocity than anything in the speech on Hafter.

Serraj said that a government functions better when state institutions worked in a complimentary manner, something which did not exist in Libya. He said that matters had reached a point beyond all levels between his government and the CBL.

He said that relations between his Finance Ministry and the CBL had ceased to the extent that the CBL refused to meet with the ministry and intermediaries had to be used. This had led to a three-month delay in paying state-sector salaries and the release of the Emergency Budget by the CBL. The delay in paying state-sector salaries had caused much inconvenience to citizens, most of whom rely on a state salary for survival.

He explained that the CBL would not release the Emergency Budget until the 2020 LD 38.5 bn state budget had been approved by his government. Serraj complained that with the country’s ongoing oil stoppage, it was not government as usual and that this led to the delay of the 2020 budget’s approval. He complained that the CBL was too rigid in its decisions during times of crisis and referred to the rest of the world and their extraordinary measures during the Coronavirus outbreak – let alone Libya and its virtually permanent state of crisis.

CBL stopping the opening of letters of credit

Serraj went on to criticise El-Kaber for also halting the opening of letters of credit (LCs) at a critical time for the country. He saw no logic or wisdom in this at a time when other countries were increasing their strategic stocks of medical and food supplies. He placed the responsibility of this delay on El-Kaber, warning that even if he did recommence the issuing of LCs, it could be too late as the goods Libya needs may no longer be available during this Coronavirus crisis.

Government makes policies not the CBL

Serraj said that his government through its Economy Ministry should be the competent authority making the country’s economic decisions – and not the CBL. He said that the CBL was interfering in all the country’s decisions including on oil, health, Coronavirus, ammunition, municipalities and on rubbish collection. But the CBL was not interfering or talking about the long bank queues that Serraj said he saw on his way. This is as if this (bank queues) were outside the CBL’s competency, he added. It has become a strange situation with the CBL he complained. Who takes on the responsibility of people queuing during a Coronavirus outbreak, he asked?

He complained that at one point the CBL used to blame the liquidity problem on security issues. Now he said, the fighters (militias) were at the battle front yet there were still bank queues. Monetary and financial policy and liquidity problems are the concern of the CBL and it should do its job. The CBL was interfering in everything, Serraj said, except its monetary and financial policy. It is causing confusion by its interference not solving other problems. He said that this problem, of the CBL interference in all government policy, is very dangerous and needed solving.

Call for reunification of the CBL board

The CBL failed to come up with reform policies – because it was split. Its board is split. This led me to call for the reunification of the CBL board, he explained. He said many interpreted this as a conspiracy and as my desire to have the Tripoli CBL Governor changed for a pro Hafter Governor (Mohamed Shukri was elected in January 2018 by the House of Representatives as the new CBL Governor, but El-Kaber refused to vacate his post).

Serraj said he did not care less who was Governor of the CBL. He cared about reopening the sale of foreign currency and LCs and importing vital goods for the Libyan citizen as the CBL had wasted 30-40 days not doing this. He said the CBL needed a board as it could not continue functioning unilaterally this way. He was not concerned if it were the existing board or a new one or a caretaker one. This did not concern him as it was a matter for the legislature. The CBL comes under the auspices of the legislature – he reiterated. he wanted to reduce the burden on the citizen, he said. That’s his only demand.

International calls for ‘’food for oil’’

Serraj warned that as a result of the split in the CBL there are some international calls for extreme measures, such as a ‘‘food for oil sales’’ policy. This, he said, was another reason why it was imperative that the CBL is urgently reunited. He insisted that an international audit of both banks – which he said he had requested – be conducted. People had the right to know how the money was spent, he added.

Libya’s problems are political not legal

Serraj said Libya’s problems are political and not legal. He gave the example that Qaddafi had left Libya with about US$ 200 bn of reserves but that still did not furnish comfort or prosperity for the Libyan people. He warned against overconcern with long term sustainability and preservation of reserves – as was the case with Qaddafi – while people suffered in the here and now. Serraj

reiterated that all Libya’s state institutions such as the government and legislature and the CBL and the Audit Bureau – were politically split.

The CBL has become an unknown ‘‘black box’’

He said the CBL had become an unknown ‘‘black box’’ that no one knew how it operated. It wanted to interfere in all state institutions – but did not want anyone else to interfere in it. It should accept its responsibility.

The government did not want to interfere in the CBL, but it should reform its institutions under its competency, make liquidity available, reduce bank queues, complete its board, set foreign currency sales surcharge – instead of the government – and provide a monetary policy – by concentrating on its areas of competency.

Serraj saluted all the Coronavirus medical front-liners for endangering themselves who he called the real fighters on an equal footing to those on the battlefront against Hafter. He said his government had done a reasonable job in preparing for the possible spread of the virus by preparing quarantine/isolation centres, etc and that the public should not ask for the impossible. It could not transform a dilapidated health system it had inherited from the Qaddafi regime – overnight.

He regretted that while the world asked for a humanitarian pause in Libya’s fighting in order to concentrate on fighting the virus – the ‘fool’ Hafter has ignored these calls and continued the fighting. This has added an additional burden on the health sector trying to reach those on the battlefront areas. He asked people to follow medical advice on the curfew, social distancing and avoiding crowds.

On the subject of media coverage of corruption, he urged people with any evidence to bring it forward to the relevant authorities rather than make unproven media accusations – that is, if Libyans wanted a state of law rather than a state of mafias (vigilantes). He warned the media over agitating on the subject and causing a stir.

He called on wisemen, elders and social leaders to be more proactive, not by taking sides, but simply by speaking the truth.

Serraj said that the ‘‘fool’’ (Hafter) was responsible for the oil closure not his government and could not understand why the CBL kept blaming it for its closure. With regards to the international community he said now that there is an oil glut, they were not interested in lifting the stoppage. If they needed the oil it would have been reopened in 72 hours – as had happened in the previous stoppage.