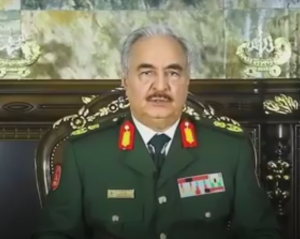 Khalifa Hafter called for the Libyan people to empower him to lead them out of the current political impasse (Photo: Archives from Libyan tv).

In a televised speech on Thursday night, Khalifa Haftar, commander of the Libyan National Army (LNA), called on Libyan people to empower him to lead them out of the country’s current impasse.

He called on ”all Libyan free men to take a historic decision with confidence and firmness through local councils and civil society institutions, which mandates an institution they see fit (his LNA?) to lead Libya in its next phase and manage the affairs of the country in accordance with a constitutional declaration issued to cross that stage into peace and achieve what the Libyan people aspire to”.

During a speech that completely contradicts the speech made by House of Representatives head Ageela Saleh, Hafter called on Libyans through local councils, civil society institutions, political, social, cultural, trade union and professional organizations to express their free will and ‘‘correct the course’’of the country.

He reassured Libyans that the Libyan armed forces (LNA) will be fully prepared and guarantor after God to implement their decision: “We will continue their struggle until the liberation of the entire Libyan territory.”, he added.

As mentioned, whereas Ageela Saleh had made a more detailed political proposal based on working with and amending the existing detailed political framework, the Skhirat 2015 Libyan Political Agreement, by restructuring the Presidency Council, Hafter called for the abandonment of the LPA and what seems to be calling for a popular movement to empower him to take political action.

He called the Presidency Council corrupt, treasonous, terrorist and militia supporting and financing which had invited the invading Turks into Libya.

Critics have said that Hafter’s call was no more than the call for the re-installation of military rule in Libya. They also say it came in reaction to his recent military defeats at the hands of the forces defending Tripoli.

There is also speculation in Tripoli as to whether the two speeches were coordinated, playing bad cop, good cop, or whether they reflect the tension and conflict between Hafter and Saleh.