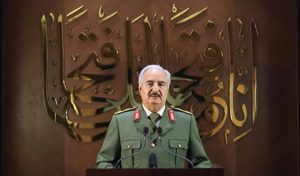 LNA commander Khalifa Hafter unilaterally abrogates the LPA in a move labelled as a coup by critics (Photo: Social Media).

In the televised speech aired last night, Hafter said that he was responding to calls by the Libyan people to mandate him to lead the country. The calls, in the form of a few token demonstrations, came in response to his own request last Thursday (23 April) that the Libyan people mandate him to lead Libya out of its current political impasse – over and beyond the current political process. The move has been labelled as a coup.

The announcement by Hafter puts him in direct conflict with his one-time ally HoR head Ageela Saleh who had launched his own political initiative also last Thursday. However, Ageela’s initiative aimed to work within the LPA framework and sought to reform it by choosing a new executive (Presidency Council/Government of National Accord).

It must be recalled that Hafter was appointed to command the LNA by Ageela Saleh – in his role as head of the HoR. A coup against the LPA is a coup against the HoR which recognizes the LPA and the civilian democratic process. Hafter’s unilateral abrogation of the LPA puts him in conflict with the HoR – if not overthrows its authority and legitimacy. It is unclear how the two can coexist and what Ageela Saleh and the HoR’s response will be.

Hafter’s critics have accused Hafter of finally coming out of the woods and showing his true colours as a dictator. They have pointed out that becoming a military dictator and returning Libya to military rule had been his aim all along and that he had used the HoR and civilian process simply as a veil to hide his political aims.

It will be recalled that the UN-brokered LPA signed in Skhirat, Morocco in December 2015 was the compromise and consensual agreement reached between the two opposed Libyan camps after the Tripoli militia coup by ”Libya Dawn” in 2014 which overthrew the existing democratic order in western Libya. It set up an alternative Government of National Salvation as the democratically elected HoR and its caretaker government were forced to settle in the east. Libya’s split continued from thereon.

The LPA created the current Presidency Council and its Government of National Accord (the executive) as well as the advisory body, the High State Council, which accommodates the rump of the outgoing parliament, the General National Council (GNC).

The LPA stipulated that all three bodies were to work together and agree consensually on major issues such as drafting the constitution, elections, approving the government (GNA) and security reform. This included heads of sovereign institutions and any reform to existing bodies. Even the HoR, the democratically elected body as a result of the 2014 elections – cannot reform the LPA unilaterally.

It is the lack of security and specifically militia reform that has been used – rightly or wrongly – as the one of the main excuses for the rejection of the GNA and the LPA. The LPA clearly stipulates for the reform of Libya’s militias. While the HoR recognizes the LPA, it has refused to recognize its government. The Tripoli government failed miserably to reform the militias – indeed rather than enlisting and absorbing them into its police, army and state intelligence apparatus (institutions), experts agree that it is the militias that have succeeded in absorbing Tripoli’s state institutions by leading or controlling them.

Hence, rather than the Tripoli government controlling the militias – it depends on the militias for its survival and operation.

The Tripoli Central Bank of Libya

Another axe to grind with Tripoli by the HoR is the Tripoli Central Bank of Libya (CBL). Libya’s east accuse it of being corrupt and of opening Letters of Credit to militias. It has sacked the incumbent Tripoli CBL Governor two times, but he has refused to budge.

Hence, despite what the LPA stipulates on paper and in text, the east found themselves powerless and marginalized to affect Libya’s politics through the LPA process. Tripoli is in control of the inherited institutions such as the CBL and NOC, and in control of the oil money which as a result of historic contracts flows into Tripoli. The east found themselves unable to reduce the power of western Libya’s militias and power/money balance which led them increasingly to use methods outside the LPA and civilian political dialogue.

None of this justifies Hafter’s year-long military onslaught on Tripoli and the deaths, injury and damage to civilians and infrastructure – but once the east set off on an escalatory path, they found themselves with no option but a military attempt to shift the balance.

Critics see this move as a last-ditch desperate act by Hafter in view of his recent military losses in western Libya.