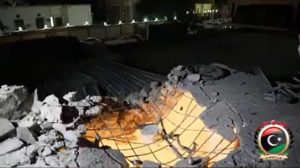 Libya’s internationally recognized government’s Ministry of Health strongly condemn today’s dawn bombing and targeting of medical facilities, which it reminded were contrary to all international conventions and laws. It said this was part of a series of attacks on medical facilities. The attack is attributed to the Khalifa Hafter forces.

It reported that the shelling of residential neighbourhoods opposite the hospital, in Sidi Khalifa and Zawia street and Soor street, injured 14 civilians, including women and children. The Dermatology and Communicable Diseases departments of Tripoli Central Hospital (Zawia Street hospital) along with several other adjacent health sections were also hit causing ‘‘severe’’ damage, it added.

The bombing caused panic amongst medical staff and terrorized civilians the ministry said.

The bombing was also condemned by Tripoli’s internationally recognized Libyan government through its Interior Ministry. The ministry strongly condemned this repeated action by ‘‘militias and mercenaries of the war criminal Khalifa Hafter’’. It said these repeated crimes targeting residential and civilian areas, utilities and vital sites proves the beastliness of Hafter’s militias that have lost all humanity.

It added that these actions terrorizing civilians are a result of the defeats Hafter has suffered on the battlefield, forcing him to take revengeful actions on Tripoli’s civilians.

It decried the international community’s inaction and called on it to accept its responsibilities, adding that their turning a blind eye to Hafter’s crimes had sent him a signal to continue to violate international laws and human rights.

Indiscriminate shelling of Tripoli’s civilians continues in holy Ramadan despite internationals calls for, and an LNA announced ‘humanitarian’ ceasefire