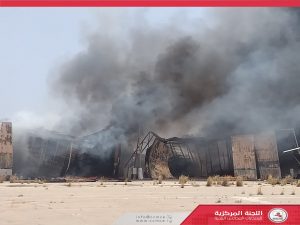 The warehouses of the Central Committee for Municipal Council Elections were burnt by indiscriminate shelling attributed to the Khalifa Hafter forces (Photo: CCMCE).

The main warehouse of the Central Committee for Municipal Council Elections (CCMCE) was burned and destroyed by indiscriminate shelling last Friday (15 May) attributed by Tripoli to the forces of Khalifa Hafter. The warehouses occupy a section of Mitiga airport.

The warehouses contained ballot boxes and other electoral material and the CCMCE said that they had been using these warehouses since 2013 for 117 municipal councils throughout Libya.

The CCMCE had been preparing to hold a new round of municipal elections which were halted by the war on Tripoli launched in April 2019 by Khalifa Hafter and his Libyan National Army (LNA) and more recently halted by the Corona pandemic.