Quick negotiations required for ceasefire, time for Libyans to act to stop Russian and other interference: U.S. Secretary of State Pompeo on Libya 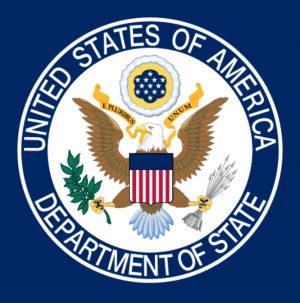 As both the warring Libyan sides pour over every reported phone call and every reported utterance by the international community for signs of support, U.S. Secretary of State Pompeo yesterday urged a quick ceasefire that would lead to political talks. He warned against continued foreign interference.

Pompeo said “The agreement between the GNA and the LNA to re-enter UN security talks was a good first step, very positive. Quick and good faith negotiations are now required to implement a ceasefire and relaunch the UN-led intra-Libyan political talks.

It’s time. It’s time for all Libyans on all sides to act, so that neither Russia nor any other country can interfere in Libya’s sovereignty for its own gain’’.

In a similar vein, the U.S. Embassy said yesterday that the U.S. is concerned for the continued escalation in Sirte. It said that it shares the immediate concerns about yet another humanitarian crisis in Libya – this time in Sirte.

Pompeo’s statement comes on the back of more cryptic reports of telephone talks between Trump and Erdogan, Trump and Sisi, Putin and Erdogan and Putin and Sisi – where each of the contending Libyan side reports a favourable interpretation of the said calls.

Of his phone call with Trump yesterday, Erdogan reported that “America is following the situation in Libya and Trump confirmed Turkey’s success in its endeavours in Libya.”

Then he cryptically added that “After contacting the US President, we can say that a new stage will start for Turkey and that further steps will be taken, such as contacting Russian President Putin.”

Egypt meanwhile reported that Sisi held a phone call on Wednesday with Trump during which they discussed the Cairo Libya initiative.

Egypt reported that Trump expressed his welcome to “the Egyptian efforts to achieve a political settlement to the crisis and end the violence by supporting the ceasefire in Libya and activating the will of the Libyan people to achieve security and stability for their country.”

Germany’s Ambassador to Tripoli Oliver Owcza also met Hafter yesterday at his Rajma headquarters in eastern Libya (and NOT in Venezuela as his enemies/critics had wishfully reported!). He reported: ‘‘In today’s meeting with Gen Haftar I expressed concern about ongoing military confrontations and their worrisome impact on civilian population. I encouraged a constructive resumption of 5+5 talks towards a reliable ceasefire, thereby also addressing structural security concerns’’.

Owcza also met House of Representatives (HoR) head Ageela Saleh. reporting that ‘‘Substantative meeting with HoR Speaker Agila Saleh. He briefed me on his recent political initiative, and we exchanged views on the follow-up of the Berlin conference. We also discussed ways how to lift the blockade of oil infrastructure to the benefit of all Libyans.’’

All of the above also come on the back of a joint statement by the EU, France, Germany and Italy on Monday supporting the Cairo Libya peace initiative, calling for an immediate ceasefire, the withdrawal of foreign forces and mercenaries, and the withdrawal from Libya of military equipment supplies in violation of the UN arms embargo.

U.S expresses concern for continued escalation of fighting in Sirte

Internationally recognized Libyan government seeks to control ‘‘all’’ Libyan territory, will not negotiate with ‘‘obstacle’’ Hafter