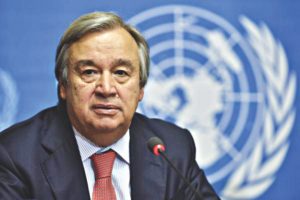 The Spokesperson to the UN Secretary General Antonio Guterres said on Friday that the ‘‘Secretary-General is deeply shocked by the discovery of multiple mass graves in recent days, the majority of them in Tarhouna.

The Secretary-General calls for a thorough and transparent investigation, and for the perpetrators to be brought to justice. In particular, he calls on the authorities to secure the mass graves, identify the victims, establish causes of death and return the bodies to next of kin.

The United Nations has offered support in this regard.

The Secretary-General reiterates his call for an immediate end to the fighting in Libya in order to save lives and end civilian suffering.

He welcomes the resumption of the work of the Libyan Joint Military Commission and hopes that a ceasefire will be agreed soon’’.