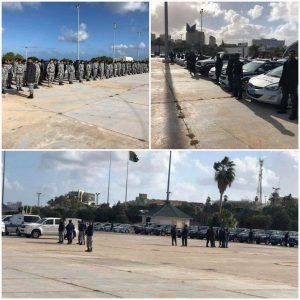 The Joint Operations Room was formed earlier this month by the internationally recognized Libyan government in Tripoli to unify and coordinate military operations.

The militias had taken up these civilian locations as their headquarters during the war on Tripoli against Khalifa Hafter.

The aim of the evacuation of the locations is to enable the responsible authorities to carry out their tasks properly and to enforce the rule of law. On Tuesday, the Joint Operations Room had issued a final warning to the militias, giving them 48 hours to evacuate their headquarters and transfer to the camp of the Second Brigade on Salah al-Din Road, threatening to take action against those who refuse to carry out the instructions to evacuate.

It will be recalled that UNSMIL had held a virtual meeting on 11 July with the Interior Ministry of Libya’s internationally recognized government in Tripoli on Security Sector Reform (SSR) and Disarmament Demobilization and Reintegration (DDR). The meeting had included UNSMIL Acting head Stephanie Williams and Interior Minister Fathi Bashagha.

UNSMIL reported that the two sides ‘‘agreed on resuming the activities of the support programmes and projects – that were impacted following the outbreak of hostilities in April 2019 – and underlined the linkage between SSR and economic reforms’’.

The meeting came on the back of militia clashes in the Tripoli suburb of Janzur which UNSMIL had condemned.

The two militias, officially recognized by the Faiez Serraj-led internationally recognized government had been fighting side-by-side only weeks earlier against the Khalifa Hafter forces on the south Tripoli battlefronts.

In its condemnation statement, UNSMIL had said that ‘‘the clashes underscore the need for the GNA (Tripoli Libyan government) to move swiftly on effective and coordinated Security Sector Reform and Disarmament Demobilization and Reintegration efforts’’.