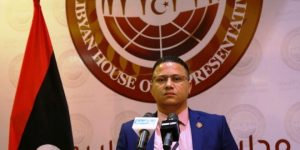 Egypt’s parliament approved the deployment of troops ‘‘outside the country’’ on Monday. The move is seen as clearing the way for Egypt to interfere openly in Libya.

Egypt has been supporting Khalifa Hafter’s forces and the eastern-based Libyan parliament, the House of Representatives (HoR) unofficially or covertly for a number of years. This overt decision would be ”official” cover for its possible overt Libyan intervention in the future.

Egypt wants to deter the forces of Libya’s internationally recognized government based in Tripoli, and their Turkish backers, from pushing further than the current Sirte-Jufra stalemate line.

It insists it has a valid security interest in what happens in Libya. It had declared the Sirte-Jufra axis a ‘‘red line’’. Libya’s Tripoli government, however, having pushed Hafter’s forces out from the edges of Tripoli and completely out of western Libya in June, do not accept Egypt’s red lines.

They see themselves as the only internationally recognized and legitimate Libyan government. They feel they have a legitimate right to ‘‘liberate’’ all of Libya’s territory, and the right to invite Turkey into a military alliance.

Libya’s eastern-based and only internationally recognized parliament, on the other hand, says it has not approved the Tripoli government, and feels as the only elected body, it too has the right to go into a military alliance with Egypt.

Egypt fears Turkey’s increased influence in Libya which it does not want to spread as far as its western border (Libya’s eastern border).

Backed by Turkey and emboldened by its recent military successes since June, Tripoli now wants to capture Sirte, Jufra and the strategically important eastern oil fields. It sees this as a good opportunity to negate Khalifa Hafter and his Libyan National Army as a military factor.

Yesterday, HoR official spokesperson Abdalla Belheeg, welcomed the Egyptian parliament’s decision. He said it came in support of ‘‘their brothers in Libya in order to maintain the security of the two countries’’.

He also said the Egyptian parliament’s decision came in response to the call by their ‘‘Libyan brothers and their representatives, sheikhs, dignitaries and mayors of Libyan tribes during their meeting’’ with Egyptian President Abdel Fattah Sisi in the past few days ‘‘to address all the dangers that surround Libya’s and Egypt’s joint national security”.

Belheeg added that the decision will also help ‘‘counter foreign ambitions in Libya from Turkey that supports terrorism, extremism, and outlaw militias’’, and that ‘‘Turkey has not stopped violating Security Council resolutions and international resolutions prohibiting the supply of weapons (to Libya) through its continuous supply, until this day, of weapons and ammunitions and mercenaries in support of armed militias”.

The HoR official spokesperson also went on to say that the Egyptian Parliament’s decision on Monday ‘‘supported their brothers in Libya in order to continue to maintain the security of Libya, Egypt and the region from Turkish colonial ambitions aimed at plundering the region’s wealth, wreaking havoc and instability, and will contribute to security, stability and spoiling the militia project and the chaos supported by Turkey and other countries supporting this project’’.

Belheeg concluded by saying ‘‘we salute the Egyptian people and His Excellency President Abdel Fattah El Sisi and the Egyptian Parliament, its presidency and members, on the courageous position that embodies the depth of fraternal relations between our two countries and our brotherly, and embodies Arab solidarity. Egypt was and will continue to be the beating heart of Arabism and the great sister of Arab countries’’.