Russian involvement in Libya evident, Kremlin lies every time they deny it: AFRICOM 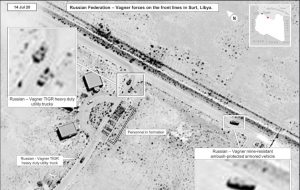 U.S. Africa Command (AFRICOM) reported yesterday that it has ‘‘mounting evidence that Russia, through the Wagner Group, continues to position military equipment in Libya capable of conducting kinetic operations there’’.

Providing photographic evidence, it said overhead imagery shows Wagner forces and equipment on the front lines of the Libyan conflict in Sirte.

It says that it assesses that the Russian Federation continues to violate UN Security Council Resolution UNSCR 1970 by actively providing military equipment and fighters to the front lines of the Libya conflict.

It adds that as it has documented in a series of previous media releases, the U.S. assesses that Russia supplied Wagner forces operating in Libya with fighter aircraft, military armoured vehicles, air defence systems, and supplies, further complicating the situation and increasing the risk for miscalculation leading to continued and needless violence in Libya.

It says that the latest imagery details the extent of equipment being supplied to Wagner. Russian military cargo aircraft, including IL-76s, continue to supply Wagner fighters. Russian air defence equipment, including SA-22s, are present in Libya and operated by Russia, the Wagner Group or their proxies. It also says photos also show Wagner utility trucks and Russian mine-resistant, ambush ­protected armoured vehicles are also present in Libya. 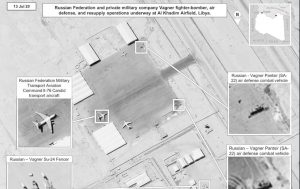 “The type and volume of equipment demonstrates an intent toward sustained offensive combat action capabilities, not humanitarian relief, and indicates the Russian Ministry of Defense is supporting these operations,” said Gering.

It reminded that in May, it reported at least 14 Mig-29s and Su-24s had been flown from Russia to Syria, where their Russian markings were painted over to camouflage their origin. The aircraft were then flown into Libya, a violation of the UN arms embargo. U.S. Africa Command assesses that the warplanes are being actively flown in Libyan airspace.

It also reminded that it had previously provided photographic evidence that Wagner has laid landmines and improvised explosive devices (IEDs) in civilian areas in and around Tripoli without regard to safety of civilians.

AFRICOM said it has continued to document how Russia uses Wagner Group as a proxy in Libya to establish a long-term presence on the Mediterranean Sea.

“Russian involvement is evident–which the Kremlin lies about every time they deny it,” said Col. Chris Karns, AFRICOM director of public affairs.

In conclusion, the statement said the U.S. supports a political solution in Libya and encourages all parties to adhere to the UN arms embargo.