With Eid approaching, power blackouts and water cuts continue to plague Libya during its summer heat 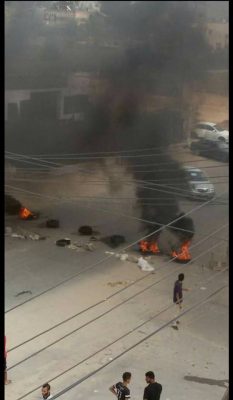 Youth burning tyres as part of demonstrations against extended power cuts in Tripoli in the summer of 2016 (Photo: Social Media).

With Eid only two days away, on and off power cuts and blackouts, as well as water cuts, have continued to plague Libya during its summer heat.

According to the beleaguered state General Electricity Company of Libya (GECOL), the electricity grid is still ‘‘in a state of construction after yesterday’s blackout’’. This was not Libya’s first total blackout this summer.

The state monopoly power generator and distributor said that some of its generating units had not yet returned to grid. It reported that there was a generation deficit for Tuesday of 2230 MW.

GECOL’s use of the term ‘‘citizens’’ and ‘‘by force’’ is, of course, code for armed citizens and armed militias. It dare not callout certain militias from certain regions, cities or districts that will not accept an equitable distribution of power cuts. They ‘‘force’’ GECOL to keep electric supply on for them – at the expense of other areas. This, GECOL says, is hampering its effort to fix the grid.

Meanwhile, the Man-made River Authority, the supplier of over 80 percent of Libya’s water, said in a statement yesterday that water supply to Tripoli had been interrupted because of the power cuts to its water wells and pumping stations during the week. It said it was working with GECOL to reinstate power supplies.

Eid without water or power?

Many Libyans are opting out on the option of slaughtering a ram for the traditional Eid Al-Adha (Feast of Sacrifice) this year starting in two days’ time. Several housewives told Libya Herald it would be impossible and unbearably inconvenient to slaughter a ram with power and water cuts.

With fridges and freezers not working, for those without generators,  it would be impossible to store the meat of a whole ram. And without water to clear up the post-slaughter mess, it would be a health hazard and impossible to perform, they added. They said they had opted this year to buy some meat from the butchers in order to enjoy the traditional BBQ – without all the chores of the slaughter.

Libya has had a deficit of around 2,000 MW now for the best part of a decade – or since the overthrow of the Qaddafi regime in 2011. Successive domestic and international governments have failed to resolve the problem.

In September 2019, for example, the current Serraj government had promised to increase generation capacity by 2,100 MW by June 2020.

GECOL have long admitted that there is a generation capacity deficit of about 2,000 MW, with its power stations only producing about 5,000 MW as opposed to Libya’s peak winter and summer demand of about 7,000 MW. This deficit has persisted despite the company receiving billions in state budgets.

The company blames the lack of security as the main cause of the continuing chronic power cuts. Certainly, the 14-month Khalifa Hafter war on Tripoli has not helped. But the problem has been ever-present since 2011

GECOL has confirmed a long list of outstanding contracts in place totalling 5,000 MW, that if completed, would wipe out the power cuts.

These projects have been mostly stalled since 2011 despite GECOL trying on various occasions to get the contracting companies to return. For example, contractors had returned in 2013 only to leave in 2014, and they returned in 2015 only to be forced to leave again due to lack of security in 2016. The last example of this, GECOL pointed out, was the kidnapping of the Ubari plant foreign employees.

GECOL has pointed to the example of neighbouring Algeria and Egypt who both had had both a power generation deficit which they resolved in three years and now have generation surpluses.

Completing these stalled contracts is the solution to Libya’s power shortage, GECOL had stressed. However, foreign contractors will not return with Libya’s current security situation as their precondition to returning is the guarantee of security for their employees, it had explained.

GECOL had even admitted that some foreign companies sent their own security plans as a precondition to return to Libya. GECOL had said they had approved these plans. It had said they were still trying to convince the foreign contractors to return and were hopefully some will return “soon”.

Meanwhile, the Libyan public has become totally fed up with press conferences and is no longer interested in the excuses for the causes of the power cuts. They are unhappy with the billions allocated to GECOL without any apparent results. These had led to demonstrations this year which were partly responsible for Faiez Serraj sacking the GECOL board of directors last week.

It will be recalled that GECOL had signed an MoU with German energy generation giant Siemens in August 2017. The agreement was supposed to pave the way for the return of the German company to Libya to complete its many outstanding projects.

These include the completion of the Ubari power plant in southern Libya, which was over 90 percent complete, as well as providing urgently needed maintenance to several other power plants.

In reality, the agreements have failed miserably to solve Libya’s electricity crisis.

Moreover, since April 2018 a Libya Electricity Sector Reform Task Force was formed by the Faiez Serraj government. It held its first meeting in Tunis in April 2018 organized by USAID and GECOL.

The Task Force was charged with the development of strategic policy, regulatory and operational measures to support a sustainable Libyan electricity sector as well as the regulatory authority with a clear mandate, separate from that of the GECOL.

U.S. assistance to Libya’s electricity sector came in response to a request from Libya’s Serraj government to help identify causes of the ongoing electricity supply crisis in Libya and to recommend strategic actions to alleviate that crisis.

The U.S. Government has made expert advice available to support the work of the Electricity Sector Reform Task Force as it seeks to improve reliable electricity to the people of Libya.

With USAID assistance, GECOL developed the Electricity Sector Reform Roadmap in 2017. However, in practice, and on the ground, Libya’s power generation deficit and crippling power cuts have continued.