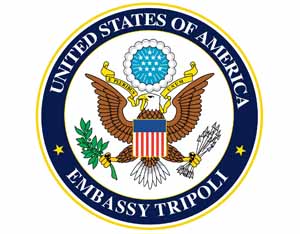 It reported that in meetings with Deputy Prime Minister Ahmed Maiteeg and Minister of Interior Fathi Bashagha, Chargé Harris reiterated ‘‘U.S. support for Libya’s sovereignty and territorial integrity, underscored that foreign forces and mercenaries should depart, and expressed the Embassy’s readiness to work with a comprehensive range of Libyan figures across the country who reject foreign interference’’.

He was also reported to have reiterated U.S. respect for the contributions of Misratan forces to the fight against terrorism.

It will be recalled that in May-June this year, the Khalifa Hafter forces, which had been laying a military siege to Tripoli for 14 months, had been pushed by the pro Tripoli government out of Greater Tripoli and the whole western region.

Today, the de facto ceasefire line is just west of Sirte, where both camps have been building up their forces in preparation for a new attack. Egypt, an ally of Hafter, had warned that the Tripoli forces, backed by Turkey, must not cross the ‘‘red line’’ of Sirte-Jufra.

Jufra is the large strategic airbase south of Sirte where the U.S. says Russia, through private military company Wagner, is building up troops and weapons ready for an attack.

The U.S. is also hoping that now that the independent international audit of the two Central Banks of Libya has been agreed by the two opposing sides, Hafter and his allies can lift Libya’s oil blockade in place since January this year.

Another purported grievance by Hafter and eastern Libya is that governments in Tripoli are under the influence and subjugated to Tripoli and western militias. The U.S. is hoping that, as prescribed by the Libyan Political Agreement (LPA), progress would start to be made in the DDR of Libya’s dominant militias. The U.S, in a rare case when talking about Libya, pulled no punches and referred to them as ‘‘violent militias’’.

The U.S. reiterating ‘‘support for Libya’s sovereignty and territorial integrity’’ is a signal that it does not support foreign partition of Libya or any domestic separatist movements planning to export Libya’s eastern-based oil.

With regards to ‘‘foreign mercenaries’’ the U.S. has been extremely critical of Russia’s proxy use of Wagner to further its foreign policy aims in the Mediterranean. Also, both sides have used thousands of mercenaries from Syria and sub-Saharan Africa.

It may also be a signal to Egypt and its threat to send troops over its western border to repulse Turkey’s push beyond the Sirte-Jufra ‘‘red line’’.

The U.S Embassy’s ‘‘readiness to work with a comprehensive range of Libyan figures across the country who reject foreign interference’’, is seen as a reference to, and support of, House of Representatives head Ageela Saleh and his 8-point April peace initiative. Much of these were recycled in the June Cairo initiative.

By highlighting Saleh and his Libya Political Agreement / Berlin Conference-based initiative, the U.S. is promoting a political solution over a military solution and hoping to reduce the role and influence of Hafter.

The jury is still out, however, on how much the Donald Trump-led U.S. Administration is willing to invest politically in Libya. Beyond run-of-the-mill with little conviction statements, U.S. interest in Libya has only recently peaked with increased Russian-Wagner involvement.

Libya’s oil revenues down to US$ 46 million in June: NOC