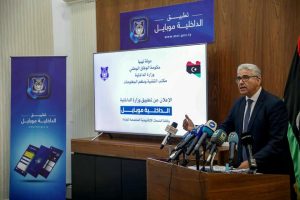 Fathi Bashagha, Tripoli’s Interior Minister, launches Apps to help improve security. The jury is still out as to whether he can be effective in fighting the country’s militias (Photo: Tripoli Interior Ministry).

The App package, in fact, has several Apps, with the App accessible by citizens meant to help citizens report lawbreakers by facilitating communication between them and the Ministry’s various agencies.

Bashagha said that security cannot be achieved in the absence of citizens’ rights, the deterioration of electricity and health services and the spread of corruption in all the enclaves of the Libyan state, which, he said, are exploited and blackmailed in many ways by several internal and external parties.

“We will pay with our blood to fight all the attempts that are being made against us and we will care for and preserve the civil state for which we have fought for many years,” Bashagha said.

The App package is meant to be able to deliver information with ease and confidentiality to the Ministry, including the section for investigation by traffic, ports and central security police, as well as for other entities to search for stolen motor vehicles using a database prepared for this purpose.

Another ‘‘Wanted and Suspicious Entities’’ App announced at the conference is for wanted persons who try to undermine security to be used by the Criminal Investigation Service. The Ministry revealed that more than thirty-five thousand records are accessible through the App of criminals with a crime record.

Meanwhile, another App announced was the ‘‘Inform Me’’ App which enables citizens to report a crime to a specific secure unit, which can then be circulated to all security agencies – while protecting citizens’ identity and safety.

Time will very soon tell how effective these Apps are or if they are mere scarecrow gimmicks.

Bashagha’s attempts to externalize Libya’s lack of security to civilian or armed citizens will not wash. There is no doubt the single most cause of Libya’s insecurity and failure of the reformation of the state and the better functioning of state entities today – is its armed militias. Moreover, it is its state paid and recognized armed militias that are the most responsible for lawbreaking and state destabilization.

It is they, operating under state cover and recognition, that are responsible for the most serious and state-weakening blackmail, coercion, white collar corruption and crime, monopolistic racketeering etc.

This can be applied to the opening of preferential letters of credit (LCs), black-market hard currency sales and price manipulation, cooking gas distribution and sales, diesel sales and distribution etc etc.

To convince the general Libyan public that he is serious in his desire to disarm, demobilize and reintegrate (DDR) and bring Interior Ministry-recognized militias under control, Bashagha has got much internal organization and reforming to do.

Libya’s insecurity is watched under a microscope both domestically and internationally. A few PR App stunts and App red herrings will no longer wash. Insecurity cannot be veiled . It is a reality lived through by every Libyan, everyday, and is reflected in hard currency prices, business and investment confidence – and the reopening of foreign embassies in Tripoli.

While Bashagha is commended for his efforts, and many hold the view that it may take a former militiaman to reform Libya’s militias, Bashagha’s critics  also see in him the ambitious politician.

They see him as being on a domestic and international ”election” campaign. They see his recent slick public relations films and domestic and overseas visits and campaigns as a nudge to the international community to ”appoint” him as the successor to the unpopular and ineffective current internationally recognized Prime Minister, Faiez Serraj.

He is seen to be positioning himself as the ”law and order” option, but unlike Hafter, he presents himself as the law and order man within a civilian state. The fact that he hails from Misrata is seen by some – but not all – as an advantage.

The fact that he talked during his press conference about areas outside the scope of an Interior Minister is seen as evidence of this. When he talked during the App launch of ”deterioration of electricity” and ”health services” and ”the spread of corruption in all the enclaves of the Libyan state, which are exploited and blackmailed in many ways by several internal and external parties” – critics immediately accuse him of electioneering.

Time will tell if Bashagha is serious or is on a shallow election campaign. Time will also tell if he is effective in improving security. All his predecessors had failed. There is no doubt that the Libyan public is desperate for stability and security – and any one who succeeds in delivering these would gain their favour.