Increased Turkish, Maltese Italian diplomacy with Libya – the development of a new tripartite relationship as Italy attempts to pushback? 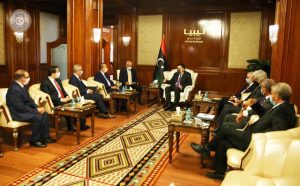 As the Turkish and Maltese Foreign Ministers converge on Libya policy: Are Turkey and Malta squeezing Italian influence out of Libya? (Photo: Libyan Tripoli government).

Turkish-Maltese relations have developed over the issue of Libya recently. Some analysts choose to see this as another example of further EU policy fragmentation – whilst others see Malta as conveniently representing the EU and ensuring EU policy is not totally overlooked. The mention of illegal migration in meetings is seen as evidence of this.

It will be recalled that last May, Malta withdrew from the EU’s Operation IRINI, designed to enforce the international arms embargo on Libya – a move that was widely seen at the time as a gesture to Turkey. Ankara views IRINI as designed specifically against it.

During his Tripoli visit, Cavusoglu said that “diplomatic visits between Turkey, Libya and Malta will continue in upcoming days as a solution to Libyan conflict remains unlikely for now”.

Meanwhile, Italian Defence Minister Lorenzo Guerini was in Tripoli on 5 August for talks with Sarraj on several issues, including de-mining and land reclamation, healthcare, the return of Italian companies and the resumption of oil production.

He was accompanied, among others, by the Italian Chief of Staff, Lt. Gen. Enzo Vicarelli, Gen. Luciano Portolano (Chief of Staff of the Allied Joint Force Command, Naples) and the head of Foreign Intelligence, Gen. Gianni Caravelli.  Caravelli was last in Tripoli on 16 July when accompanying Italian Interior minister Luciana Lamorgese.

A statement from the Italian Defence Ministry, after the latest visit, indicated that Italy was ready for what Guerini called a “new burst of military co-operation”.

Among potential developments, he mentioned training Libyan cadets, officers and non-commissioned officers both in Italy and Libya as well as the provision of healthcare for the Libyan military and the relocation of the Italian field hospital in Misrata “to a more functional area”.

The visit is seen as another move by Italy to balance the growing military and economic influence and presence of Turkey. Italy and Turkey are the two main rivals in western Libya and Sarraj (as well as his Deputy Ahmed Maetig, who is considered very pro-Italian) is trying to steer a careful line between Italy and Turkey, but it is a rivalry that Italy currently appears to be losing.

The Turkish military have been reportedly demanding the Italians quit Misrata airport which they want to convert into a Turkish airbase.  The decision to remove the Italian military field hospital to a “more functional area” suggests they may have won this particular battle.

On 20 July, the GNA’s customs department agreed to outsource cargo tracking to a Turkish company, SCK. The decision is seen as another small victory for Turkey over Italy.