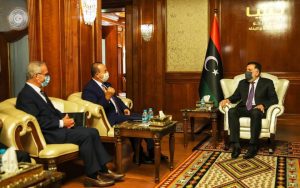 Tripoli reported that Turkey and Malta confirmed their support for the internationally recognized Libyan government, that there is no military solution to the Libyan crisis and that the security and stability of Libya is of great importance.

According to the joint statement, the three delegations expressed reservations about the IRINI operation and highlighted its shortcomings.

IRINI is the European Union Naval Force Mediterranean Operation (EUNAVFOR MED IRINI) that was launched on 31 March 31 this year with the aim to enforce the United Nations arms embargo to Libya. The operation has been a total disaster as a process and politically. Libya has witnessed huge arms accumulation in the intervening period.

Libya also reported that the delegations announced an agreement to strengthen joint cooperation, the return of Turkish and Maltese companies to Libya and work to resume flights between Libya and Malta and Turkey.

The delegations also stressed that illegal immigration poses not only a threat to EU countries but also a direct threat to Libya. They called for strengthening of Libya’s southern border, combating human trafficking and smuggling, and Turkey and Malta expressed readiness to support the Tripoli government in this regard by raising the capacity of Libya’s coast guard.

The three delegations also stressed the importance of EU participation in addressing the root causes of illegal migration by assisting in development programmes at the source of such migration. Work was also agreed to form a joint working group to coordinate efforts and cooperation among the three countries in order to translate any agreements into concrete practical projects.