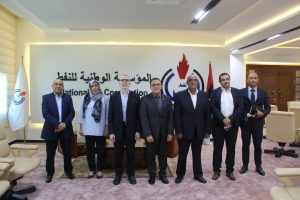 The NOC and Malta discussed oil and gas cooperation at a meeting in Tripoli last week (Photo: NOC).

The meeting included the NOC Board of Directors and the accompanying Maltese delegation.

Sanalla, commented: “Libya and Malta have unique relations, both geographically and historically which go back for many years, and we thank the Maltese side for its desire to seek cooperation in the field of oil and gas. As we hope for further work and cooperation with the NOC in every possible way to combat the smuggling issue that has exhausted the Libyan state in these difficult circumstances the country is going through, and Malta, as a neighbor and a friend to Libya, can play a significant role and contribute to the return of its stability. “

Ambassador Saliba, expressed his happiness with this visit, praising the thoroughness of the historical relationship between the two countries, cementing that the stability of Libya is part of the stability of Malta, and that the economic relationship between the two countries goes back for twenty years, indicating that the main purpose of this visit is to discuss cooperation in the oil field with the National Oil Corporation.

The attendees discussed building communications channels which serve the interest of both countries many issues of concern to the oil sector in Libya, including the possibility of activating the memorandum concluded between the two countries in 2013, which states the cooperation between Libya and Malta, in addition to discussing the development of the Tripoli Oil Clinic in several areas, such as updating the analysis laboratories, operating rooms, and training medical personnel in the sanatorium and elevating their efficiency.

In conclusion, Sanalla assured that there are many great opportunities for cooperation between the two countries , such as contracting, logistics and communications, and other aspects required in the Libyan oil sector, and this will not occur until of stability of Libya has been restored, which we seek its occurrence as soon as possible with the assistance of friendly countries, including Malta.