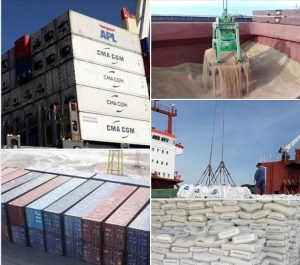 Imports continue to arrive apace at Benghazi port, including cement which is an indicator of increased post-war construction activity (Photo: Benghazi Port Authority).

Containers of mixed goods and ships carrying grain and cement are amongst the ships that have docked this week at Benghazi port, its authority announced today.

The activity highlights the fact that trade continues, and Libya continues to import in the hundreds of millions of dollars of its oil revenues on goods from abroad.

The report indicates a number of factors. It shows that maritime trade and shipping is very active into Libyan ports and that Benghazi port has made full recovery playing its role in supplying the eastern region.

The continued import of cement indicates the uptake in construction activity in the country especially post war destruction, and the failure of local factories to restart full production after war damage and meet local demand.

It also indicates that the Tripoli Central Bank of Libya is still opening hard currency Letters of Credit , mainly from its reserves, despite oil exports having been blockaded since January.

8,000 tons of cement to arrive at Tobruk port