New express bus routes from Tripoli to Gharian and Yefren 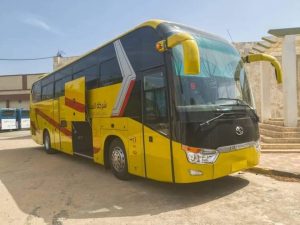 The Essahim company is launching an express bus service from Tripoli to Gharian and Yefren (Photo: Social media).

The Essahim Company for Public Transport has announced the launch of two new express bus routes from Tripoli to Gharian and Yefren, both Western/Nefousa Mountain cities south of Tripoli.

The company said it is keen to expand its operations to cover a larger number of Libyan cities and to serve a wider spectrum of the public.

It will be recalled the company operates routes to Mitiga airport and to Misrata airport (when it is operating).

It has also imported tens of buses from China and operates multiple commuter routes across Tripoli.