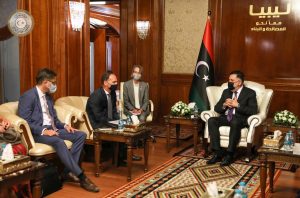 Faiez Serraj tells German Foreign Minister Heiko Maas that he accepts the proposed permanent ceasefire on condition that the international community guarantees that Hafter does not repeat his aggression (Photo: PC/GNA).

The meeting discussed the latest developments in Libya and German efforts to resolve the Libyan crisis, the Tripoli Libyan government reported.

The German Minister said that his country is seeking to push the path of settlement in Libya within the framework of the outcomes of the Berlin conference, starting with a permanent ceasefire and suggesting that the areas of Sirte and Jufra be demilitarized.

The issue of lifting the closure of oil sites and agreeing on how to distribute resources, the positive step of building confidence through the audit of the Central Bank of Libya, were all touched upon. He was reported to have said that all proposals must be approved by the legitimate Libyan government based in Tripoli.

The German foreign minister spoke about his country’s efforts to find a way out for the countries involved in the Libyan conflict, pointing out the need for everyone to make concessions so that it does not develop from a civil war to an open war with the military intervention of the countries supporting the two sides.

For his part, Serraj expressed appreciation for the role of Germany and its Chancellor in seeking peace in Libya through the Berlin conference, and continuous communication with various parties in search of a way out of the crisis.

Serraj explained that his government was the first to adhere to the Berlin process, and its approval of the ceasefire during the Moscow meeting, which was rejected by the other party (Khalifa Hafter), and he reviewed the failure of the other party to abide by any understanding that had occurred in the past and its continued breach of trust to the undertakings it was making.

Serraj said his government is taking into account its long negative experience with this party (Hafter), adding that his government had not actually found a partner for peace, noting that the forces continue to be mobilized and the number of Wagner mercenaries and others is increasing.

With regards to the European operation IRINI to implement the arms embargo to Libya, Serraj said that this operation did not stop the air bridge to transport weapons, equipment and mercenaries to the other (Hafter’s) side, and that there are countries that say that the operation produces positive results, while the reality, he added, confirms the contrary.

Serraj spoke of the country’s losses and the hardships suffered by the people as a result of the closure of oil sites, adding that Libyans will not remain silent for long on the blockading their sole source of livelihood (oil).

In conclusion, Serraj said that his government had no objection to the ceasefire after discussing all its details and the necessary guarantees for the aggression (by Hafter) not to be repeated.