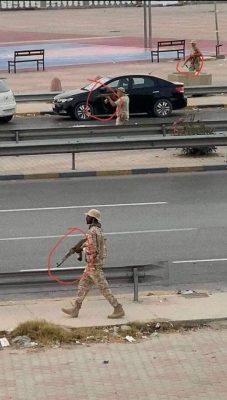 The Interior Ministry aligned to the internationally recognized Libyan government in Tripoli has acknowledged the shooting by pro-government forces against unarmed civilian demonstrators in Tripoli yesterday.

The demonstrations took part in several cities, including Tripoli, Misrata and Zawia. Non were reported in eastern-based cities under the control of Khalifa Hafter.

The demonstrations were against the poor living conditions in the country, including frequent and lengthy power and water cuts over the years, fuel, cooking gas and cash shortages, poor services and security, and rising number of cases of Coronavirus.

In its statement yesterday, the Tripoli Interior Ministry acknowledged the right of citizens to peaceful demonstrations and confirmed that it had provided security for the demonstration.

It also revealed that it had identified the shooters which it referred to as ‘‘hidden plants’’ within the peaceful demonstrators. It claimed that they were not part of the Interior Ministry but did not deny that they were recognized by the Tripoli government.

Meanwhile, in a separate statement today, the Tripoli Protection Force (TPF), a coalition of Tripoli’s main (Tripoli) government-recognized militias (formed in December 2018 in response to Hafter’s growing threat) gave the Tripoli authorities 24 hours to reveal the identity of the shooters.

The TPF then granted the Tripoli government and its Interior Ministry, the Public Prosecutor’s Office and the Military Prosecutor’s Office 24-hours to investigate and come out in a press conference to accept responsibility and reveal the identity of the shooters and lift the legal cover they enjoy and refer them to justice.