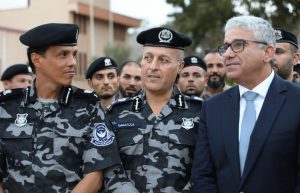 A beaming Bashagha is welcomed by his loyal forces after being reinstated as Interior Minister by Serraj yesterday (Photo: Tripoli Interior Ministry).

In turn, Bashagha read a prepared and clearly compromise statement in a video clip posted on both his Interior Ministry and Serraj’s government Facebook page.

In its statement, the Serraj government said that it had held an ‘‘accountability session’’ with Interior Minister Fathi Bashagha on Thursday about the demonstrations that took place in Tripoli during the past period, the role of the Interior Ministry in securing them, and in securing their non-penetration and abuses that some demonstrators have been subjected to.

The statement said that, after the meeting, which lasted for over five hours and was held at the Cabinet Office with only the Presidency Council members, Bashagha confirmed the cohesion of all state security institutions, and that they work under the leadership and coordination of the Serraj Presidential Council.

Bashagha also stressed the Ministry of Interior’s continued integration, absorption and rehabilitation of the security and military force to enable it to perform its role within the security and defence integration programme, in recognition of its heroic role in defending the capital, Tripoli.

Bashagha stressed the commitment of state institutions to exercise their specific competences in accordance with Libyan legislation and to integrate in meeting the needs of citizens’’.

When Bashagha arrived at the Prime Minister’s Office, his loyal Interior Ministry forces surrounded the location as if to impose a siege. The message was later reaffirmed when his Ministry posted 18 photos of Bashagha ‘‘being welcomed (hailed?)’’ by his forces, some of which were in full combat gear. 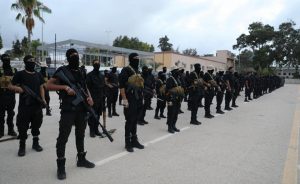 The episode manifests the new post-Qaddafi and the new Skhirat / Libyan Political Agreement Libya. It is a Libya of militias with token civilian rulers all under the auspices of the international community.

The Bashagha incident highlighted the fact that Serraj is a token leader and that he has no power to sack his Interior Minister. Bashagha challenged Serraj to a public showdown where the administration’s dirty linen and skeletons in the cupboards could be aired. Serraj, his domestic and international backers and sponsors, chose to pass.

The photographs of Bashagha with his forces, in one of which he was clearly smirking with joy, show who runs western Libya. Serraj has made Bashagha a new populist hero in Tripoli and Misrata. Bashagha may have been reinstated as Interior Minister, but he might as well have been anointed as Libya’s real Prime Minister.

It is clear from the events of the last few days that what is good for Libyans is not necessarily what is good for the international community. The international community wants stability in Libya – at any cost. It simply wants an interlocutor, a person they know, they are used to and can and have done business with. This is not strange or new. Many Arab and developing world states have been ruled for decades by convenient friends of the western community.

Serraj has been in office, but definitely not in effective, progressive power, into five years now. Libyans’ needs and demands can wait another 5 years.

The fears of unknown change by the international community range from destabilizing the new Hafter equilibrium and reopening a window for continued and increased Russian (proxy?) influence.

Turkey, having, thanks to Hafter and his foreign backers, obtained a god-sent military, political and economic foothold in western Libya, did not want the applecart to be toppled. They want the continuation of the status quo and the hope of resumption of multi-billion stalled contracts.

Italy wants the continuation of an interlocutor in Serraj and Maetig and a continuation of the Libya’s control of the flow of illegal migration across the Mediterranean.

Meanwhile, into its fifth year, the Skhirat administration lives on while the lot of Libyans regresses. Five years on, power, water, mobile phone, internet cuts continue. Five years on, black-markets and queues for petrol, diesel and cooking gas continue. And five years on the cash crisis continues while healthcare and the fight against the spread of the Coronavirus regress.

This much was admitted by Acting UNSMIL head Stephanie Williams in her latest brief to the UN Security Council on Tuesday. She warned that ‘‘All these elements are producing a fertile ground for social unrest across the country and confirm once more that the status-quo is simply unsustainable’’, and that ‘‘Instability is further compounded by degraded socio-economic conditions, fuelling popular unrest and threatening the fragile calm required to advance our security and political discussions’’.