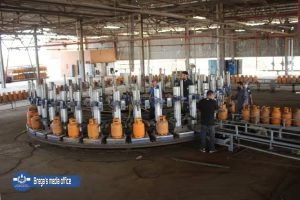 The depot had been damaged many times over the years since the 2011 revolution and more recently as a result of Khalifa Hafter’s attack on Tripoli.

Brega said it will start partial operations today for delivering gas cylinders to the local market, but hoped to become fully operational soon. This, it added, will hopefully reduce the burden on the Libyan public who have suffered as a result of the gas cylinder shortage.

The acute shortage has led to a vibrant black market often operated, allegedly, by Brega employees in collusion with militias. Black market prices have rocketing from the official LD 3 per cylinder to around LD 60 in Tripoli, and to over LD 100 in the south of Libya.

Brega said that work was also ongoing to equip the warehouse for the re-maintenance and operation of its fuel filling systems.

The shortage and rocketing black market prices of cooking gas cylinders have been one of the many factors attributed to have contributed to Libya’s recent demonstrations and the subsequent political fall out.

Arrest warrants issued for Tripoli protests shootings, one under arrest; 13 out of 21 Tripoli demonstrators released – 8 still held for questioning