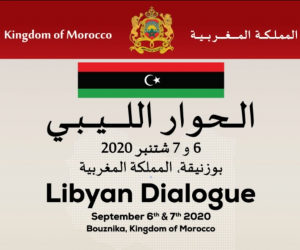 Both the UN and U.S positive about Rabat, Morocco Libya dialogue, as talks are extended by one day (Photo: Social Media).

In response to questions related to the inter-Libyan dialogue in Rabat (Bouznika) Morocco, involving delegations from the High State Council (HSC) and the House of Representatives (HoR), the spokesperson of the United Nations Secretary-General said yesterday that ‘‘The Secretary-General is supportive of all initiatives that would advance and complement the ongoing peace efforts spearheaded by the Berlin Conference on Libya of January 2020.

Since the beginning of the Libyan crisis, the Kingdom of Morocco has played a constructive role and has contributed to UN efforts aimed at achieving a peaceful resolution of the Libyan conflict.

The Libyan Political Agreement signed in 2015 in Skhirat is a testament to Morocco’s resolute engagement in finding a solution to the Libya crisis alongside the United Nations. We trust that the latest initiative by Morocco will have a positive impact on the United Nations facilitation of the Libyan owned and Libyan led political dialogue’’.

Today, the U.S. Embassy echoed that general sentiment saying it ‘‘shares the UN’s confidence that Libyan talks in Morocco will have a positive impact on UN-facilitated and Libyan-led political dialogue’’.

Meanwhile, while there are no official updates from the talks, leaked reports say the discussions are ongoing about the appointment (apportionment!?) of the key seven sovereign positions. There are also unconfirmed leaks of talks about reappointing a new Presidency Council and Prime Minister (the 3+1 formula).

Purported lists of the new Presidency Council, Prime Minister and Ministries are also circulating on social media. However, some of these are suspected as kites or lightening rods to test political elite and Libyan public reaction.

Reports say that HoR head Ageela Saleh and HSC head Khaled Mishri have failed to meet at Rabat. One positive indicator, however, is that the talks have been extended by at least one day.