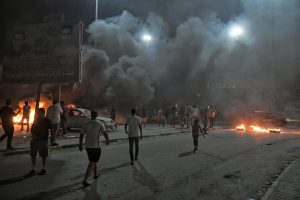 There were reports of demonstrations in eastern Libya, specifically in numerous areas of Benghazi, yesterday. The demonstrations follow on from those that started last month in western and southern Libya.

Reports say the demonstrators were protesting, amongst other causes, corruption, deteriorating living conditions, power cuts and fuel shortages. Some also called for the removal of all the current political strata responsible for their poor living conditions.

Some main roads were blockaded by protestors using rubbish bins and burning rubbish and tyres.