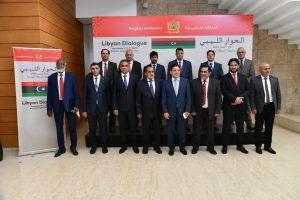 Delegations from the Libya’s HoR and HSC meeting in Rabat, Morocco for five days, agreed yesterday on the standards and mechanisms for appointing Libya’s main sovereign positions (Photo: Social Media).

At the end of their five day meetings in Rabat, Morocco yesterday, members of the Tobruk-based House of Representatives (HoR) and High State Council (HSC) announced in a joint communique a comprehensive agreement on transparent and objective standards and mechanisms for appointing Libya’s main sovereign positions. The talks were planned for two days and had to be extended.

They also announced that they had agreed to continue their dialogue and resume these meetings in the last week of this month, in order to complete the necessary procedures, which ensure the implementation and activation of this agreement.

They stressed that this is in accordance with Article 15 of the 2015 Skhirat Libyan Political Agreement, and an affirmation of the Berlin Libya Conference outcomes, which supports a political solution, and on the basis of the relevant Security Council resolutions.

Both UNSMIL and the U.S welcomed the talks.

Equally, in another statement, a group of 24 HSC members had strongly rejected and condemned the attempt to reduce the HSC ‘‘to the person of its President or in the Office of the Presidency together and in cooperation with a number of agents and advisers’’.

They complained that the method of choosing the delegation was in violation of the rules of procedure governing the work of the HSC.

In reaction, HSC head Khaled Mishri said the Rabat talks were consultative and not binding on the HSC.

With over nine years of failed ‘‘interim governments’’ since the February 2011 revolution that toppled the Qaddafi regime, the by now hyper cynical Libyan general public has not spared the talks of its wrath either. Labelling them pejoratively ‘‘Skhirat 2’’, the general refrain was that the Rabat delegates were in Rabat for an all-payed  holiday dividing up the top-paying sovereign positions instead of seeking to solve the average citizen’s ever-present problems of electricity and water cuts, fuel, cooking gas and cash shortages, an out of control Coronavirus outbreak – and a host of other poor public services.