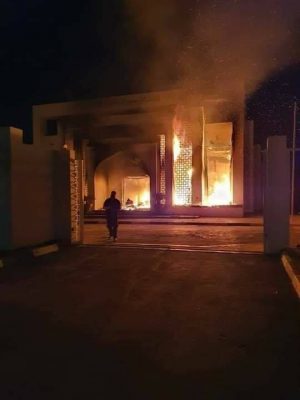 Demonstrators in eastern Libya have burnt government and state buildings including the HoR and, above. the Prime Minister’s Office (Photo: Social Media).

Demonstrations continued and spread in eastern Libya over the last three days.

Besides the now usual burning of rubbish and tyres, demonstrators in Benghazi set fire to the (parliament) House of Representatives building as well as to the seat of the Interim Government recognized by the HoR.

In Marj, there are reports that at least two demonstrators were injured after they were shot at by security forces as they set fire to the Security Directorate.

Marj Municipality, while confirming its citizens right to peaceful demonstrations called on them to respect public property and keep to peaceful protests.

In turn, the eastern-based Ministry of Interior called on demonstrators not to damage state headquarters or to exceed the right to demonstrate and peaceful expression.