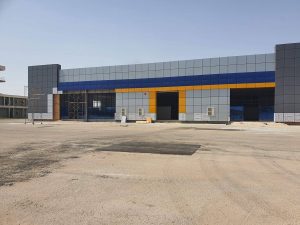 The project is a rarity in that it is a Public Private Partnership (PPP) development project between Libya’s state Libyan Iron and Steel Company (LISCO) and a private Libyan tourism company, Kevalay.

A presentation during the visit to the Passenger Terminal highlighted that the project could be a vital and important gateway to the Libyan coast, contributing to the revitalization of Libyan tourism.

It would take advantage of Misrata’s seaside location near the coastal-Sahara transit zone, and the international tourism archaeological attraction site of Leptis Magna.

The presentation reviewed the project which has entered the final stages of implementation, in preparation for its opening soon, explaining the project’s components, capacity, and its operating and management plans in accordance with international standards. The Passenger Terminal is expected to create hundreds of jobs.