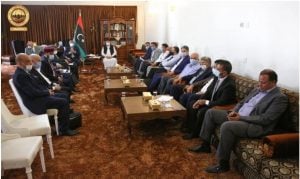 Following three days of consecutive demonstrations in a number of eastern cities in which roads were blocked, rubbish and tyres burnt and protesters were shot at by government security forces injuring at least three (there is an unconfirmed report of a death), Libya’s eastern-based government offered its resignation.

Its resignation was presented to Ageela Saleh, the head of Libya’s internationally recognized parliament based in eastern Libya, the House of Representatives (HoR) during an emergency meeting called by Saleh yesterday. Saleh will present the resignation to a meeting of the HoR and has meanwhile asked the Abdulla Thinni government to continue in a caretaker capacity.

The official HoR Spokesperson, Abdulla Belheeg reported that the meeting was called to discuss ‘‘the reasons for the deteriorating service and living conditions of citizens, especially the crisis of power outages’’.

Besides Prime Minister Thinni, the meeting was attended by Thinni’s Deputy Prime Minister for Services, his Ministers of Finance, Health and Economy, the Governor of the Eastern Central Bank of Libya, a representative of the eastern Electricity Authority and the heads of the HoR Committees.

The protesters were citing these deteriorating living conditions, as well as others, as their grievances during their demonstrations. But they also called for the removal of all of Libya’s current ruling elite.

HoR Official Spokesperson Belheeg said that Saleh was “briefed during the meeting with a detailed explanation of the work of the government, ministries and concerned bodies about the causes of the deterioration of the services and conditions and the crisis of power outages and their impact on the daily life of citizens.”

He added that engineers and officials of the General Electricity Company confirmed that the electricity crisis “was caused by the shortage of fuel supplies feeding power plants from oil and diesel” and denied the existence of technical problems in the company.

He claimed that the eastern Interim Government has provided two diesel tankers, and more than four tankers will be provided in the next few days to unload crude stock in oil port tanks with recommendations from competent engineers.

“The meeting at the residence of HoR head Ageela Saleh also addressed the health situation in the country in general, the epidemiological situation of the Corona pandemic and the provision of adequate stocks of medicine for the coming months”, Belheeg added

‘‘The provision of financial resources for the supply of essential medicines to avoid the shortage of pharmaceutical stocks in the country’’ was also discussed, while the meeting also addressed the crisis of liquidity shortages in commercial banks and the need to find possible solutions to overcome this crisis and mitigate its impact on citizens, Belheeg reported.

UNSMIL concerned over one reported civilian death, three injuries, excessive use of force and arrests of eastern demonstrators