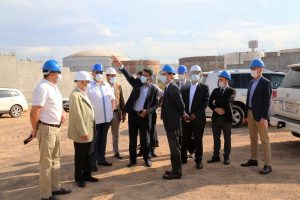 The projects are to generate a total 1,300 MW of new electricity generation and are planned to be ready before next summer’s peak demand period.

This comes as part of the agreement by Turkish implementing companies to return to Libya to resume electricity projects and as part of the urgent plan initiated by GECOL and the Faiez Serraj government to generate Libya’s power generation deficit of about 1,300 MW.

The site inspection by the two companies comes after the Tripoli Audit Bureau granted the implementing contractors a 20-day ultimatum to start their projects or risk losing them to other companies.

Power cuts have become a sensitive political issue in Libya threatening to bring both western and eastern Libyan governments down after Libya-wide demonstrations, shooting at protestors by government recognized troops, excessive use of force, arrests, injuries, at least one death, a ministerial suspension and the provisional resignation of the eastern government.

UNSMIL concerned over one reported civilian death, three injuries, excessive use of force and arrests of eastern demonstrators

Arrest warrants issued for Tripoli protests shootings, one under arrest; 13 out of 21 Tripoli demonstrators released – 8 still held for questioning