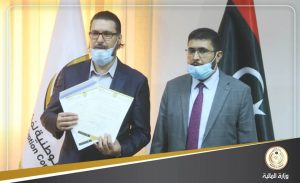 The Finance and Acting Economy Minister, Faraj Bumtari, announced yesterday that he has handed in his anti-corruption Financial Disclaimer to the National Anti-Corruption Commission (NACC) at its Tripoli headquarters.

In statement posted on his official Finance Ministry Facebook page, Bumtari said his completion and handing in of the disclaimer was ‘‘to confirm the principle of transparency and disclosure’’.

This was done, he explained, in accordance with the specific legislation in force.

The Minister stressed the need and importance of those legally targeted in submitting financial declarations within the framework of establishing the principle of transparency, disclosure and the adoption of the principle of accountability in preparation for building the state of law and institutions.

The move by Bumtari comes after his Prime Minister, Faiez Serraj, called for the activation of this mechanism during his meeting in August with Libya’s three main official oversight bodies, the Administrative Control Authority (ACA), the Audit Bureau, and the National Anti-Corruption Commission (NACC). In that meeting Serraj had stressed his full support for the bodies to conduct investigations and inspections of all files related to corruption and waste of public funds.

In response to the Serraj initiative, at the beginning of this month, the NACC discussed with the Serraj government activating the Financial Disclaimer declarations for government employees.

The discussion with the Serraj government had centred around which groups of government employees will be targeted first and dates for presentation of their disclaimers.

The meeting, which had also been attended by representatives of the Audit Bureau and the Administrative Control Authority (ACA), concluded that some of the procedures needed to be amended to enhance the work of identifying the first stage target groups and the dates of receipt of declarations.

The decision by the Serraj government to suddenly activate the Qaddafi-era disclaimer declarations comes against the backdrop of a national public outcry against perceived rampant corruption in Libya’s state sector which partly fuelled some of the ”23 August Movement” (Harak 23 August) protests. The protests led to the arrest of demonstrators and the shooting at protestors by government-recognized forces in Tripoli.

At least one shooter has been arrested and 13 out of the 21 arrested protestors have since been released. The protests and shootings also led to the temporary suspension by Serraj of his Interior Minister, Fathi Bashagha, and to a series of Serraj government decrees.

Since then, protests have spread to eastern and southern Libya. Security forces in east Libya shot at demonstrators with one reported death. Protesters burnt government and state buildings. The eastern Libyan government has handed in its resignation. UNSMIL had condemned both western and eastern government-recognized forces for using excessive force against the protesters.