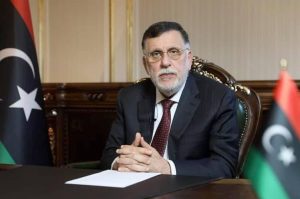 Serraj announced that he would like to resign if a replacement was agreed upon through the LPA (Photo: PC/GNA).

Libya’s internationally recognized and beleaguered Prime Minister, Faiez Serraj, announced his ‘‘sincere desire to hand over his duties to a new authority (government) no later than next October‘’. The announcement came in a televised, pre-recorded statement last night.

Sarraj, said that since its formation, his Government of National Accord (GNA) has not operated in a normal atmosphere, but has been exposed every day to internal and external plots and conspiracies.

He said that there are parties that are working to obstruct his government in a remarkable and repeated manner, which has made it face many difficulties and obstacles in many cases in the performance of its duties in the best way. “This is the truth, not an evasion of responsibility, but a recognition of reality, and this is the climate that has accompanied the government’s work since its first day,” he said.

Serraj said his government had chosen to remain silent for a long time for the sole reason which was its sincere desire to incorporate all and reach satisfactory consensus sought in public, through which the country could cross to a shore of safety.

He said that since the signing of the (2015) Skhirat Libyan Political Agreement (LPA), which appointed him to his current position, he has sought to achieve the greatest possible consensus between the parties on the Libyan scene, saying that “we were only concerned to work on unifying the state institutions so that they can provide their services properly to the citizens.”

Serraj said that the political and social climate in the country continues to live in a state of sharp alignment and polarization that made all attempts to find a peaceful settlement that saves blood and preserves the social fabric threatened by rupture, very difficult.

He welcomed the ongoing UN-sponsored consultations and the recommendations that emerged from them between the Libyan parties, hoping that they would be a good start to reach consensus. “If the recent consultations have led to elections and I will be supportive of all understandings, calling on the (House of Representatives and High State Council) Dialogue Committee to accelerate the formation of a new (executive) authority’’.

Although Serraj announced he was ”sincere” in his intention to give up power in his speech last night, many Libyans are still sceptical. Many see his announcement as just another attempted sedative attempting to reduce the tensions within the country and specifically in western Libya.

Reaction to protests, shooting at protesters and subsequent political fallout

Many see it as purely a reaction to the protests against the ineffectiveness of his government. The protesters were shot at by security forces recognized by his government precipitating in a political fallout which included Serraj suspending his Interior Minister, announcing a reshuffle and firing off a flurry of decrees aimed at reducing tension. It did not work.

The heavy downpour of rain of two days ago that flooded streets in Tripoli and Misrata and a photograph of university students taking exams using the light from their mobile phones because of a power cut, provided graphic evidence of a failed government. Serraj has failed since 2015 to resolve even one of the basic problems of continuous and acute power and water cuts, poor mobile and internet coverage, fuel and cooking gas shortages, acute cash shortages, a dramatic fall in the value of the black-market exchange rate of the Libyan Dinar and the perception of widespread state-sector corruption.

The announcement of his ”intention to handover” is also seen as a reaction to the provisional resignation by the Abdulla Thinni eastern-based government after protesters there set fire to state buildings and were shot at by eastern government-recognized security forces. Western Libyans were asking if Thinni could resign, why couldn’t Serraj.

It is noted that in his announcement, Serraj did not resign with immediate effect. In fact, he only announced his ”sincere intention to hand over to a new authority no later than October”. This, analysts have noted, has left Serraj plenty of wriggle room to either quietly forget about his announcement or wriggle out of it citing what on the face of it seem genuine reasons. For example, Serraj prescribed that he would ”hand over” and to a ”new authority”. Hence his hand over depends on there being an authority to hand over to – which can only be achieved through a HoR-HSC consensus – a consensus that has not materialized since 2015.

No legitimacy, no mandate, no support base

It was hoped that Serraj would over time gain a public mandate and domestic legitimacy by succeeding and achieving on the ground. It was hoped he would succeed in uniting Libya’s two main political streams and achieve harmony with the internationally recognized parliament, the House of Representatives.

Instead, the political gap between his Tripoli-based government and the eastern-based HoR only increased since 2015. The HoR recognized Libyan National Army, led by Khalifa Hafter, conducted a 24-month war on Tripoli. Serraj cultivated – or was forced into cultivating – a working relationship with the Tripoli-based High State Council which increased the gap and tension with the HoR. The HoR until this day does not recognize Serraj’s government.

Moreover, because Serraj has no domestic legitimacy or mandate, he has no natural support base. There will be no demonstrations in support of Serraj. This leaves him even weaker and more vulnerable to attack, conspiracy and subterfuge.

The biggest barrier to Serraj and his predecessors’s ability to affect events on the ground have been the militias. Any effective government needs to be able to implement its will by use of legitimate force – if need be. Serraj, like all Libyan Prime Ministers since the February 2011 revolution that ended the Qaddafi regime, does not enjoy a monopoly on the use of legitimate use of force. In fact, rather than enlisting and incorporating the militias into state institutions, the militias have very successfully incorporated each successive government since 2011 into them and into the service of their interests – at the expense of those of the state.

Security Sector Reform (SSR), or the Disarmament, Demobilization and Reintegration (DDR) of Libya’s militias. was meant to be one of the main pillars of the 2015 LPA, but in practice it has been its main failure. The failure of militia DDR has ensured that every successive Libyan government and all state institutions, have remained weak. This has ensured that the rule of law could not be enforced equally across the board, including on militias. It has meant that Libya has remained a militia state with a decorative layer of civilian leaders to act as face-saving interlocutors for the international community.

It will be seen if Serraj will indeed resign. The underlying reasons for the protests are still there. He has failed to resolve any of them since 2015. Serraj has talked much about democracy, especially to contrast himself with Hafter. But he may also learn that in ”democracies” the general public will always seek to blame their politicians when things are not going well. He will also learn that they generally tire of their rulers in about five years.  Serraj is in his fifth very unsuccessful year in office. In office, but he has never been in power.