Hafter announces he will permit restart of oil production and exports, but fails to withdraw forces and mercenaries from oilfields 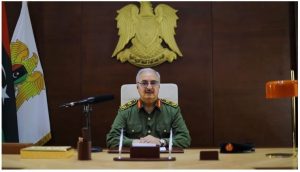 Hafter said he would permit the resumption of oil production and exports subject to conditions (Photo: Eastern-based LANA).

In his short six-and-a-half minute speech, Haftar revealed that “it was decided to resume the production and export of oil with all the necessary conditions and procedural measures that ensure a fair distribution of its financial revenues, and not to be employed to support terrorism or be subjected to robbery and looting, as guarantees to continue production and the export processes, ensuring that leads to improving the standard of living of citizens”.

Haftar bemoaned the various and recent Libya talks he was not invited to taking part in Rabat (Morocco), Montreux and Cairo which he categorized as failures. “All the initiatives announced from here and there, under the slogans of a comprehensive settlement, and addressing the crisis, all ended in utter failure.”, he claimed.

Continuing, he said “The citizen no longer has the capacity to trust more of them, because they (the initiatives) only work to prolong the crisis and complicate it. They do not recognize the right of the people in deciding their destiny through their own free will, and only care about the sharing of power between its contenders, and its contents are devoid of the slightest concern for the rights of the citizen and needs”.

“We did not see after all these embellished initiatives, and the local and international conferences based on them, and all the previous welcome they had received, we did not see the slightest progress towards a better reality, except the Libyan citizen sleeping and waking up to homelessness, unhappiness and misery’’

This he added was ‘‘after crystallizing the (Libyan) crisis in its entirety, and confining it to a foolish political conflict, waged by a group of those aspiring to power at all costs, even at the expense of the entire people, without regard for the rights and living needs of the citizen, their suffering neglected,  exacerbated to an unprecedented level as a result of the uncontrolled power struggle.”