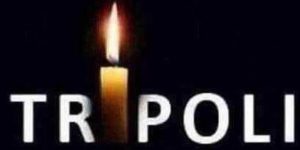 Continued lengthy power cuts have led to the closure by youth of roads using burning tyres in Tripoli and Zliten (Photo: Social media).

There were more road closures, mostly by youth, using burning tyres reported in Sug Juma, Tripoli and in Zliten – in protest at the continued and lengthy power cuts across Libya.

Some areas have had over 20 hours without electricity. A resident told Libya Herald today that whereas previously power cuts, as lengthy as they were, had been the exception, it was now easier to count the hours with electricity supply. Moreover, when the power does return for 2-4 hours, it is usually in the middle of the night.

The new grievance, the Tripoli resident added, with many Libyans now is the unjust distribution of what little power exists. There are still areas that, thanks to their coercively strong local militias, enjoy longer power supplies than others.

The power cuts have also made it almost impossible to talk to people in Tripoli.