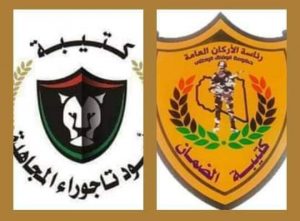 Two militias recognized by the internationally recognized Libyan government in Tripoli clashed on the borders of the eastern Tripoli suburb of Tajura (Bivi/Bir Stamilad) early this morning.

The militias, Al-Dhaman (Security) and Usood Tajura (Tajura Lions), engaged in heavy gunfire across residential areas, residents reported. Unconfirmed reports say there were Injuries and deaths as well as damage to property.

Meanwhile, the newly appointed Defence Minister of the Serraj Tripoli government, Salah Al-Namroush, ordered the use of force against the two militias if they failed to ceasefire immediately. He also ordered the dissolution of the two militias and the referral of their commanders to the Military Prosecutor for investigation.

Later in the day, the Joint Security Force, the force that can best be described as the most loyal force so far to Faiez Serraj, was sent to impose the ceasefire at the site of the clash. The area is reported to have calmed down since.