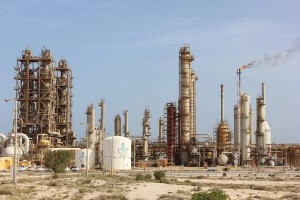 Sirte Oil Company announced yesterday that it has resumed production at its oil refinery in Brega. The resumption comes after the Maetig-Hafter agreement led to the resumption of Libyan oil production-exports. The refinery, Libya’s oldest oil refinery, had been closed for about seven months.

Fadeel Abdelmola, head of the refinery’s Production Department, said yesterday that preparations for the resumption of refining started as soon as the lifting of force majeure was announced last week.

He revealed that he expected initially the production of about 350,000 litres of diesel per day, which will be followed by petrol and kerosene production in the coming weeks and months. He said fuel will begin to be pumped to Brega Marketing Company which in turn will start distributing fuel across its network to the whole country.

It will be recalled that Libya is suffering from acute fuel shortages, including diesel, petrol and cooking gas which have led to high black-market prices. Libya has been importing petrol for years as it does not have the refining capacity to meet its domestic demand.

The shortages have also contributed to the demonstrations across Libya precipitating in political fallouts, including the shooting at demonstrators, the suspension of the Tripoli Interior Minister and the provisional resignation of both of Libya’s contesting western and eastern government.

The resumption of operations at Sirte Oil refinery will help alleviate these shortages and black-market prices as well as save Libya on its fast depleting hard currency reserves.

NOC confirms resumption of operations at ‘safe’ ports of Hariga and Brega oil ports, other ports to resume soon, production estimated at 260,000 bpd next week