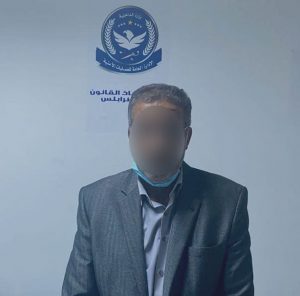 Former GECOL Projects Manager and current board member has been arrested on charges of corruption (Photo: Interior Ministry).

Libya’s Tripoli based Interior Ministry, aligned to the internationally recognized government headed by Prime Minister Faiez Serraj, announced yesterday that it had arrested former General Manager of the Projects Department of the state electricity monopoly, the General Electricity Company of Libya (GECOL). He is also currently a member of GECOL’s board of directors.

The Interior Ministry said he had been arrested as a result of a warrant issued by the Attorney General’s Office on charges of corruption.

While the Interior Ministry, as prescribed by Libyan law, refrained from naming or publishing a clear photo of the accused, it did publish his initials and a pixilated photo of him (an arrest mug shot).

However, GECOL, incensed at the way he was arrested and citing the principle of ‘‘innocent until proven guilty’’, named him (long after social media had) as Abdelhakeem Al-Furjani. It protested the publication of his initials and pixilated photo.

The arrest comes in the context of acute power cuts across Libya, including regular total blackouts. Last week some areas of Tripoli had four consecutive days of almost total power cuts. One estimate puts September as one of the worse months for power cuts, estimating that there was power for only 25 percent of the time across the month.

But it also comes in the context of a widely held perception by the Libyan public that GECOL is corrupt and ineffective. Despite the huge budgets it seems to have enjoyed over the years, it has failed to generate and deliver the electricity Libya needs.

This perception is very much backed by reports of the country’s oversight committee, the Audit Bureau.

The arrest of the GECOL board member on charges of corruption is the exception to the rule in the purported fight by the Libyan state against corruption.