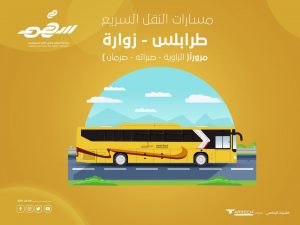 The service will stop off at nine main stops at different towns and cities along the route. Tickets cost LD 5, LD 10, and LD 15 to the furthest destination, Zuwara.

It will be recalled that the company had launched new express routes in September to and from Tarhuna, Aziziya and Zintan. It had also launched two new express bus routes from Tripoli to Gharian and Yefren, both Western/Nefousa Mountain cities south of Tripoli, back in August this year.

The company also usually operates routes to Mitiga and to Misrata airports – when the airports are operating fully.

In February an express bus service was announced to and from Tripoli and the Ras Jdair Tunisian main border crossing. The border is currently closed to passengers due to the Coronavirus outbreak.

Essahim had signed a contract in March 2019 to import a possible total of 130 buses from China’s King Long company for a new public transport network in Tripoli. A first batch of 35 ‘‘City bus’’ had arrived from China at Tripoli port in August last year.

In December the company announced the first of its Tripoli routes, with further routes going into operation since. These had stopped during the war on Tripoli by Khalifa Hafter, but the company is now relaunching them gradually.

New express bus routes from Tripoli to Gharian and Yefren