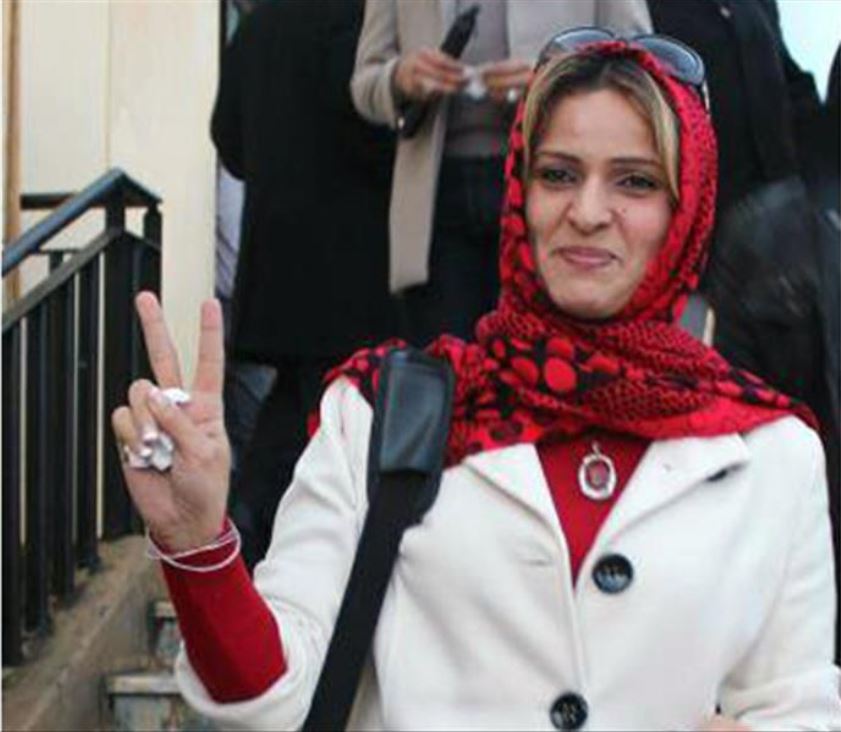 There has been wide condemnation of yesterday’s assassination of female lawyer and activist Hanan Barassi in Benghazi. Amongst others, the assassination was instantly condemned yesterday by UNSMIL, the U.S Embassy, Amnesty International and the Libyan Lawyers’ Syndicate. The EU, UK and German Embassies also condemned the act.

The Minister of Interior of the internationally recognized Libyan government in Tripoli also condemned the incident, condemning the silencing of the peaceful activists, and called on the relevant authorities in Benghazi to investigate the incident and bring the perpetrators to justice.

According to the Benghazi Security Directorate, Barasi was assassinated, on Tuesday noon, by several masked persons inside one of the shops on 20th Street, one of Benghazi’s busiest streets. It reported that the perpetrators tried to kidnap Barassi and fired several bullets that killed her. They then fled in two dark cars up a side street.

Unconfirmed reports say that there had been an earlier attempt to kidnap her daughter and that Barassi had published on her social media account that the attempt was conducted by the members of the Khalifa Hafter-led Libyan National Army (LNA). There is no independent confirmation of this allegation.

In its statement, UNSMIL ‘‘strongly condemned the killing of lawyer Hanan al-Barassi, who was shot today, in broad daylight, in Benghazi by unidentified armed men. Ms. al-Barassi had been a vocal critic of corruption, abuse of power and human rights violations. Her tragic death illustrates the threats faced by Libyan women as they dare to speak out.

UNSMIL takes note of the decision by relevant authorities in the East to initiate a prompt and thorough investigation into her death. The Mission calls for the perpetrators to be promptly brought to justice.

The killing of Ms. al-Barassi is a strong reminder for Libyans in positions of responsibility that they should put their differences aside and swiftly forge an inclusive solution to the protracted crisis to restore justice and accountability and end the prevailing climate of impunity.’’

The U.S. Embassy in its statement said that it was ‘‘gravely concerned by and closely following media reports that Hanan Al-Barassi, a vocal attorney who actively sought to fight corruption in Libya, was murdered today in Benghazi’’.

Silencing the voices of peaceful activists should not be tolerated and we reiterate our strong commitment to allowing all Libyans, including women and youth, to have a voice in their country’s future.

As Libyans from across the political spectrum gather in Tunis, this brazen killing underscores the importance of establishing a government that is accountable to the Libyan people rather than allowing corruption and brute force to dictate Libya’s future.

We urge Libyan authorities to investigate this killing and bring all those responsible to justice. We would also use this occasion to express concern about reports that airline passengers traveling from Benghazi to Tripoli were illegally detained after arrival on one of the first renewed East-West commercial flights. On the eve of a political solution to the conflict in Libya, the era of missing and murdered civilians must come to an end now’’.

Amnesty International denounced Barassi’s assassination in public who it said has been ‘‘vocal in criticizing the corruption of several individuals affiliated to armed groups in Eastern Libya’’.

‘‘She had been receiving death threats against her and her daughter as a result. One day before her death Hanan said on her social media page that she was going to release video exposing LAAF (the Khalifa Hafter-led Libyan National Army – LNA) leader’s son Saddam Haftar’s corruption’’

The Libyan Lawyer’s Syndicate in its statement said the assassination was a “systematic and cowardly act” and held the eastern-based and internationally unrecognized Libyan Government, especially the Ministries of Interior and Defence, responsible.

The Syndicate claimed that the Security Services in the eastern region “summoned’’ the Syndicate’s Benghazi branch on Monday and asked them to ‘‘silence the voice of the treacherous lawyer”. The Syndicate claims it pointing out that it “adhered to and demanded that the necessary legal methods be followed in matters disciplinary matters’’.

The Syndicate emphasized that “this heinous crime will not silence the voice of righteous lawyers and defenders of the rights of the weak and the oppressed.”

In turn, the Minister of the Interior of the Eastern Libyan Government, Ibrahim Bushnaf, directed the eastern security services to intensify investigations and the search to find those accused of assassinating Barassi and bring them to justice for this heinous act.

The assassination of Barassi follows on from those of political activist Salwa Bugaighis who had been murdered in Benghazi during Libya’s parliamentary elections on 25 June, and General National Congress (GNC) member Fariha Berkawi in July 2014.

In March 2015, a joint report of the UN Office of the High Commission for Human Rights (OHCHR) and UNSMIL said human rights defenders in Libya face threats of physical attacks, abduction, harm to their family and even murder on a daily basis.

In a stark and chilling 16-page document, OHCHR described episode after episode of attempts to silence human rights defenders in Libya, saying that violence and threats towards them have increased since May 2014.

The report highlighted abuses across the country, from Benghazi and Derna to Tripoli and Misrata, saying that with the rise in abuses, freedom of expression has been effectively curtailed in Libya.

You can read more from Amnesty International on Libyan women being under attack in Libya for speaking out:

Over 230 assassinations or attempts in Benghazi in 2014

Opinion: The assassination of Salwa Bugaighis in Benghazi – a blow to Human Rights in Libya