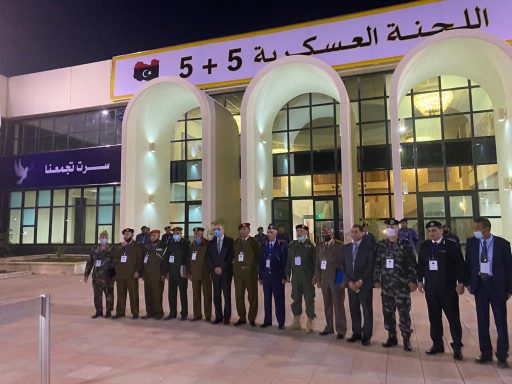 Libya’s 5 + 5 Joint Military Commission concluded the first meeting at its new headquarters in Sirte, and the sixth since its formation early this year, UNSMIL reported yesterday. The meeting had commenced on 10 November.

The goal of the meeting, the second meeting inside Libya, coming as a continuation of the talks that began in Ghadames (2-3 November), was to accelerate the implementation of the ceasefire agreement signed on October 23 in Geneva, UNSMIL explained.

At the end of the meeting, attended by UNSMIL, a closing statement was issued as follows:

First: The first stage of opening the coastal road:

Second: It was agreed that the second phase would start immediately after the end of the first phase, and it included the exit of mercenaries and foreign fighters from the area of ​​all contact lines and their withdrawal to Benghazi and Tripoli, a first step to start the process of their departure from the Libyan lands, a next step.

Third: Regarding security arrangements in the target area, the Joint Military Committee decided the following:

Fourth: The 5 + 5 Joint Military Committee decided to meet again as soon as possible.