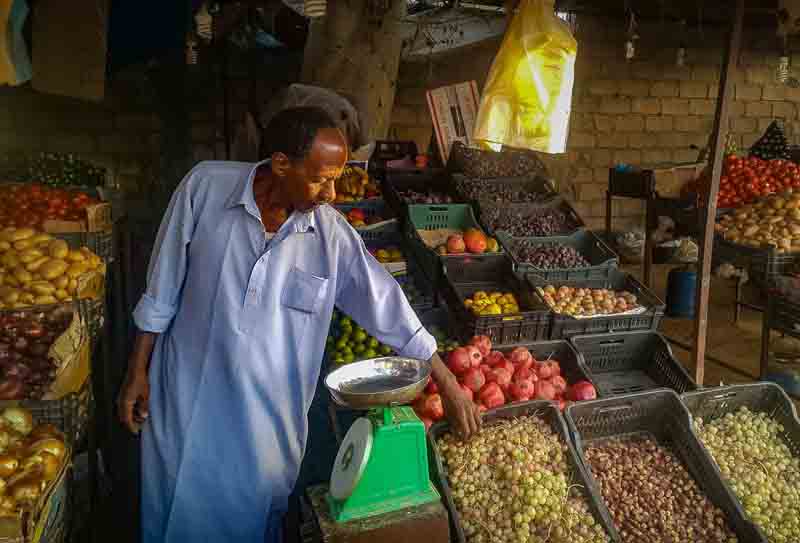 A market report by REACH says prices across Libya were up in October for (Photo: Archive photo by REACH).

In October 2020, the cost of the overall Minimum Expenditure Basket (MEB) in Libya increased by 4.3%. The finding comes from the latest report by the Joint Market Monitoring Initiative (JMMI).

The JMMI was created by the Libya Cash & Markets Working Group (CMWG) in June 2017 in an effort to inform cash-based interventions and better understand market dynamics in Libya,

The initiative is led by REACH and supported by the CMWG members. It is funded by the Office of U.S. Foreign Disaster Assistance (OFDA) and the United Nations High Commissioner for Refugees (UNHCR).

The MEB represents the minimum culturally adjusted group of items required to support a five-person Libyan household for one month. The cost of the MEB can be used as a proxy for the financial burdens facing households in different locations. The MEB’s contents were defined by the CMWG in consultation with relevant sector leads.

Markets in key urban areas across Libya are assessed on a monthly basis. In each location, field teams record prices and availability of basic food and non-food items (NFIs) sold in local shops and markets. This factsheet presents an overview of price ranges and medians for key food items and NFIs in the assessed areas, as well as the costs associated with key elements of the MEB. REACH has also conducted analysis highlighting economic vulnerability for at risk population groups that can be accessed through an interactive dashboard.

October’s MEB is 14.3% more expensive than pre-COVID levels in March 2020, the report reveals. The increase in the MEB from September – October 2020 may be attributed to seasonal production cost increases for domestically grown agricultural products, such as potatoes (+20.0%), peppers (+18.8%) and tomatoes (+18.2%), it explains.

After the lifting of the oil blockade on the 18th September 2020, Libya has rapidly increased its oil output. The rise in oil production may have led to the decrease in parallel market gasoline (-12.5%) and cooking fuel (-16.5%) prices in across Libya. West and East Libya have witnessed cooking fuel prices reverting back to pre-oil blockade levels (December 2019), whereas the cost of fuel in South Libya continues to be more than twice as expensive compared to December 2019.

After lengthy protests on both sides of the Libyan/ Tunisian border, authorities decided to allow all types of trade to continue at the Ras Jedir border crossing. The reopening of the border comes as a relief for those dependent on transporting goods between the two countries and may reduce the cost of the MEB in western cities close to Tunisia.

Crop production and yield down

The Food and Agriculture Organization of the United Nations (FAO) reports that the 2020 cereal crop production is 5% lower than the previous year, while crop yield is 12% below average. The low output may only have marginal effect on wheat prices, as the country imports 90% of its cereal consumption requirements. Farmers report that “power cuts, insecurity as well as expensive inputs, including seeds, water, fuel, tools and machinery, continue to constrain their ability to produce”. Along with movement restrictions, these challenges have likely led to a decrease in farmer income and may cause additional price spikes for locally produced products.

The liquidity crisis in Libya is a growing concern for the population, as households are not able to withdraw sufficient amounts to meet needs. Only 3.7% of customer respondents in Libya overall were able to purchase the items necessary to meet their basic needs using cash withdrawn from banks within the last 30 days.

To attain the required amount of cash, customers commonly reported resorting to using alternative methods, such as selling certified cheques on parallel markets. According to an expert, cheque traders provide physical cash at a cost that is defined by the liquidity levels of the cheque’s bank.

Overall, 54.4% of interviewed vendors reported only accepting cash. From the vendors only accepting one payment modality, the most commonly reported barriers to introduce alternatives were power cuts (30.8%) and a lack of functioning Internet (20.5%). Only 8.1% of vendors that reported not accepting other payment modalities cited a lack of demand for alternative modalities as the main reason, and another 11.4% reported not knowing any financial service providers who could help them expanding their financial infrastructure to enable them to accept additional modalities.

Since May 2020, rental prices seem to have considerably decreased in Tripoli overall (-27.0%). Within approximately the same time period (April – August 2020), there has been a 12.2% decrease in IDP numbers in Tripoli overall.

While the number of IDPs in Benghazi has reportedly increased by 24.9% between April and August 2020, findings indicate that Benghazi has seen a 2.0% overall decrease in rental prices since July 2020.