Ten entrepreneurs from Tawergha win total of US$ 277,000 grants to develop their conflict and COVID-19 affected businesses 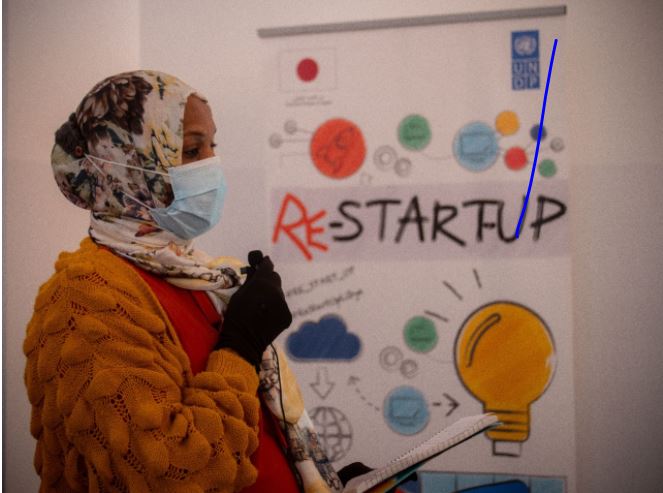 One of the entrepreneurs from Tawergha presents her business idea during the Re-Start-Up Marathon (Photo: UNDP Libya/Malek Elmaghrebi)

Ten entrepreneurs from Tawergha whose businesses were affected by conflict and COVID-19 participated in the Re-Start-Up marathon and received a total of 360,000 LYD (US$277,000) in grants to develop their businesses, the UNDP reported yesterday.

The two-day marathon was organized by the UNDP with funds from the Government of Japan, with the aim of helping entrepreneurs rebuild their businesses and reunite their communities to achieve economic recovery in Libya.

During the next months, the entrepreneurs will work with support from UNDP to restart their businesses, creating 69 jobs in Tawergha.

During the Award ceremony, UNDP Resident Representative, Mr. Gerardo Noto, stated: “I would like to congratulate the awardees. I am confident that the skills gained during the marathon will pay off for you in the future. It is time for peace, development, and entrepreneurship in Libya and I am confident the participants of the Re-Start-Up marathon will make a difference to boost jobs creation in Libya and reinvigorate the local economy to support the most vulnerable people”.

Ms. Khadija Abu Arabia, physiotherapist and one of the awardees said: “I was very happy when they informed me that I got accepted in Re-start-up marathon. I felt that, finally, someone understood and considered my business idea, as it will contribute to the stabilization of the city and support others as well as secure a better future for me and my children”.

On his part, Mr. Omar Embarak, another awardee and a father of nine children stated: “My daughter passed me the good news that I got selected to participate in the Re-start-up marathon. When the results were announced, I was very happy. I think this will be the reason for my resettlement with my family again in Tawergha. I am determined to contribute to the development of the city and its people, especially students, through my business in providing student services such as stationery, typing and printing out of documents, etc.”

The selected entrepreneurs will be technically and financially supported during the business development process, and the individual or teams’ authors of those ideas will have the chance to receive a pre-incubation accelerator program to benefit from training and mentoring for three months.