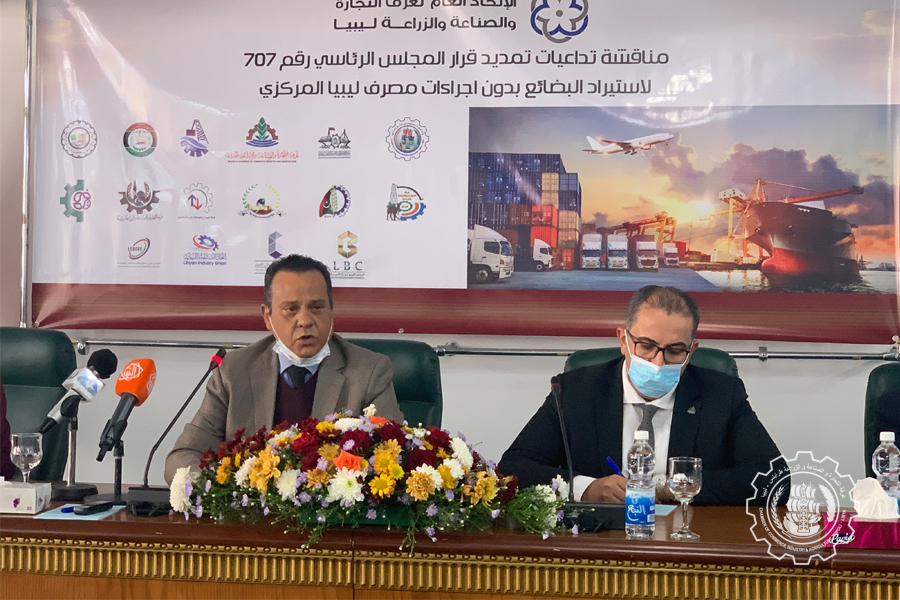 An expanded meeting of most of the Libyan Chambers of Commerce, Industry and Agriculture (15), the Libyan Business Council (LBC) and the Libyan Council for Oil and Gas (LCOG) was held at the headquarters of the Tripoli Chamber of Commerce on Monday (30 November) regarding Decree 707/2020 of the Faiez Serraj-led Libyan government based in Tripoli.

Decree 707, a type of prime ministerial executive order, overrules the decree by the Tripoli Central Bank of Libya (CBL) prescribing that goods can only be imported into Libya if they are paid for through an official banking instrument, usually a letter of credit (LC).

Reporting on the event, the hosts, the Tripoli Chamber of Commerce, Libya’s largest chamber in terms of membership, said the meeting was attended by a large number of leaders of institutions concerned with economic affairs, members of the chambers of commerce and practitioners of private economic activity.

This large turnout, it added, was an indication of the wide awareness of the depth of the gap between those responsible for economic activity file in the state versus the practitioners of private economic activity, especially the commercial part, and the gap in the responsibility of the management at the CBL.

The meeting, which lasted for several hours, put the responsibility for Libya’s current economic crisis to the presence of more than one foreign exchange rate for the Libyan dinar, the unfair conditions imposed on importers, the scarcity of liquidity at banks and the negative impact of its direct and indirect effects on consumers and merchants.

At the end of the meeting, a seven-point statement was issued which called on the government to take effective and rapid measures to stop this alarming deterioration of the economic situation in the country, placed the responsible authorities (CBL) before their responsibilities and duties towards the citizen who it said was the most affected by the crisis.

The meeting also held a protest stand in front of the headquarters of the Tripoli Chamber of Commerce, to ‘‘directly express the extent of the problem and the extent of its seriousness’’.