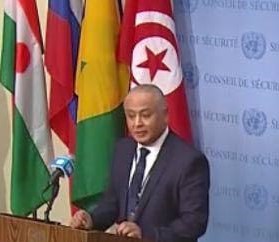 In its statement, the Tunisia Foreign Ministry, stressed its commitment to the purposes and principles of the United Nations and commitment to international legitimacy and respect for the sovereignty of states and non-interference in their internal affairs and advocacy of just causes, especially the Palestinian issue.

It highlighted that during Tunisia’s presidency, the security council’s agenda includes several regular meetings related to the Arab region, particularly the Libyan file, the situation in Syria, Yemen, Sudan and in a number of African countries such as Mali, the DRC, Somalia and Central Africa, the statement said.

The security council’s agenda during Tunisia’s presidency will address UNSMIL’s report on 15 January and an UNSMIL briefing and consultations on 28 January.

The Tunisian ambassador to the United Nations, Tarek al-Adab, also said in a press statement that his country hopes that the Security Council will pass a resolution as soon as possible under which an international ceasefire monitoring mission will be deployed in Libya, stressing that there is a need to adopt a ceasefire monitoring mechanism in Libya based on negotiations between the Libyan parties and the UNSMIL based on the proposals of UN Secretary-General Antonio Guterres.