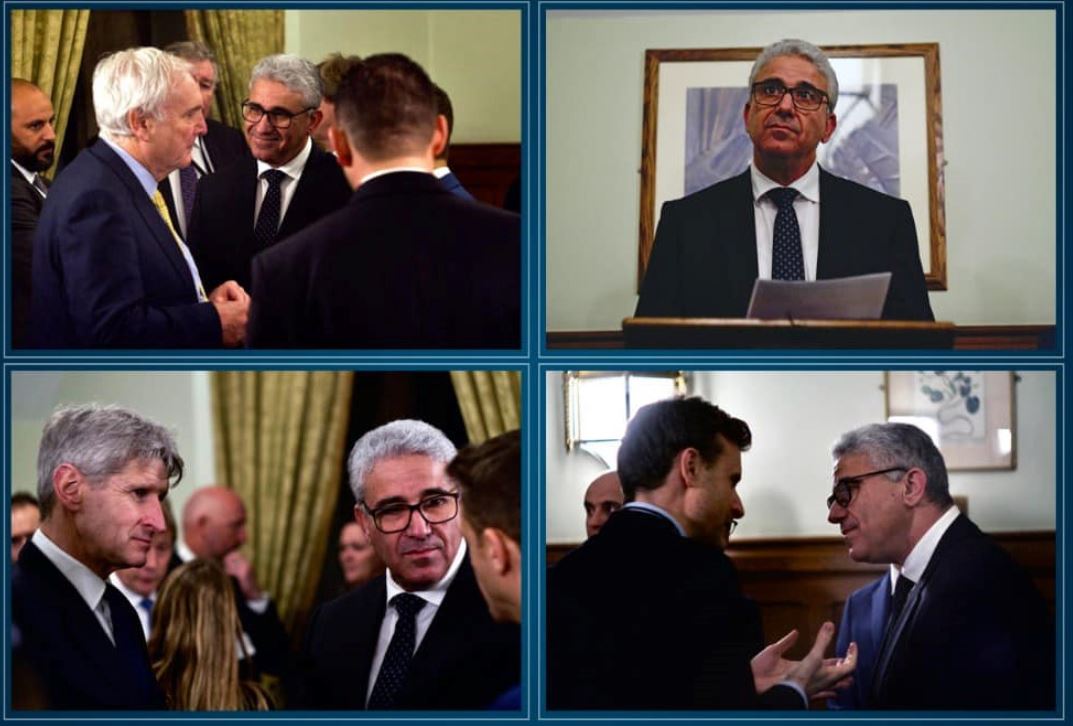 Bashagha during his visit to the British parliament in March 2020. He has been busy establishing a rapport with the international community. Critics say this is part of his election campaign (Photo: MoI).

The Libyan Defence Ministry aligned to the internationally recognized government based in Tripoli yesterday denied that it is part of the so-called operation ‘‘Snake Hunting’’.

Operation ‘‘Snake Hunting’’ is the alleged name given by Tripoli’s Interior Minister, Fathi Bashagha for a planned operation in the west of the country against militants and human smugglers. He revealed the plan in an interview with the Associated Press (AP) published on Friday (8 January).

In its statement denying it had any prior knowledge of the plan, the Libyan Tripoli Ministry of Defence affirms said that ‘‘its primary goal is to protect the homeland, by uniting the efforts of security and military institutions in combating terrorism and extremism and combating human trafficking across its borders and organized crime, as its work is subject to a specific and accurate system based on prior planning for any operation it undertakes’’.

The stress here by the MoD is the ‘‘prior planning’’ and stressing that it already does the work Bashagha had planned to do in his new operation.

The Ministry of Defence went on to ‘‘ask all parties with security competencies to coordinate in advance with the Ministry in its military and security institutions, to ensure real results that achieve security and safety for all citizens in our beloved country, and preserve the sovereignty of the homeland and its institutions’’.

The term ‘‘real results’’ here could be seen as a subtle dig at Bashagha and his real intention with the announcement of operation snake hunting.

It will be recalled that according to the AP interview, Bashagha had ‘‘announced an upcoming major offensive by his Turkey-backed Libyan government forces in the country’s west to finish off militants and target human smugglers, and invited the United States to assist’’.

The interview also said that ‘‘Bashagha said he hoped the U.S would back the upcoming operation (Snake Hunting) in the west’’ and that Turkey had ‘‘already pledged support’’ for it. ‘‘We hope the U.S. will assist us…to finish off terrorist elements that have infiltrated Libya’’, the AP interview quoted him as saying.

With regards to the attempts at the Disarmament, Demobilization and Reintegration (DDR) of Libya’s militias, and those in western Libya that hold sway over the region and Tripoli government, the AP interview said Bashagha had said that he plans to ‘‘tackle the problem by identifying militias that should be disarmed and those that could be assimilated into the security apparatus’’.

But ‘‘he said he has faced problems in implementing the plan, alleging that some militias are allied with other Tripoli officials and control some institutions, such as the intelligence apparatus’’.

He went on to say that ‘‘the problem is that some of the parts, institutions of the state provide support to these militias’’.

Whilst Bashagha must be given the benefit of the doubt with the possibility that he does indeed sincerely mean to conduct a security operation against terrorists and people smugglers in western Libya, the platform and the motives for, and timing of his operation Snake Hunting announcement must be taken with a large pinch of salt.

As the UNSMIL-brokered Libyan Political Dialogue Forum (LPDF) – now meeting virtually because of Covid-19 – struggles to agree on a mechanism for choosing Libya’s next (yet another!) interim prime minister, Bashagha has been touring capitals and signing agreements highlighting himself as that new prime minister. The high profile will do him no harm.

He admitted to this desire in the AP interview – the timing of which must also be viewed through this perspective. To this end, the whole interview could be seen as part of his election campaign. His choice of AP as the medium for his message was no accident.

Dysfunctionality and splintering of the GNA and its aligned militias

Revealingly, Bashagha admitted the limitations of his power and at the same time the lack of unity, dysfunctionality and splintering of the Tripoli political alliance and their aligned militias.

For a person the AP referred to as ‘‘The powerful interior minister of Libya’s U.N.-backed government’’ putting his hand up to be considered as the next prime minister, its quite an admission to say that the government’s intelligence service was control by militias not under the government’s control.

Hence, Bashagha’s Snake Hunting operation could be seen through the prism of the ongoing internal wranglings of the weak Tripoli government, where one set of militias aligned to Bashagha (but not the whole of his government) was tug-of-warring against another set of militias.

The stress by Bashagha on fighting terrorism and people smugglers in an interview with AP, days before Joe Biden is inaugurated as Trump’s successor must also be seen through the perspective of pandering to the U.S, UNSMIL, Europe and the international community as a whole.

It is a good platform. The strongman image still works. Many Libyans still hark back to a strong leader. Nine years of post 17 February 2011 chaos has many yearning for order and stability. If Bashagha can orchestrate operations that project him as a strong leader, such as operation Snake Hunting, it would favour him at an election as a doer and a strong leader.

It also works in many western capitals. History has left many Libyans with the perception that the West often prefers a strong ‘‘anti-extremist, terrorist, Islamist’’ dictator who imposes law and order than a weak democrat that leads to instability.

After all, Hafter’s ability to unite the eastern militias and impose law and order has worked to a great degree. He also pandered to the international community on the platform of fighting terrorists, extremists, Islamists etc. It has been proven to work.

Bashagha referred indirectly to his government’s collaboration with the U.S. through AFRICOM. He hopes that with a more willing president at the Whitehouse to continue and extend this cooperation, hoping at the same time to yield a personal political premium by either maintaining his current role as Interior Minister or gaining an even loftier position.

And there is no more noble and moral cause to support than the cause of fighting people smuggling. This panders well to Europe’s desires and particularly Italy who suffers the most from Libya’s illegal migration.

On the other hand…

On the other hand. Someone has to be Libya’s next interim prime minister to guide Libya to the planned 24 December elections. Bashagha would be as good as anyone else. Definitely as good as anyone who is unknown to the general public and with no track record.

A new interim prime minister would need months to get a handle on the job and organize for elections, while juggling all the other problems Libya has, including the Covid-19 crisis. Bashagha has already settled in and would be able to land running, so to speak.

If and when the UNSMIL-brokered LPDF does agree on the mechanism to choose the next prime minister – there would only be a few months left until the elections – too few to organize a well-informed electorate into choosing a good parliament and president.

A brand-new prime minister with little governmental experience would need months to get acquainted with the environment and be effective by December. Bashagha could be a good compromise.

At least Bashagha has good contacts with western Libyan militias, and being from Misrata, naturally has good working relationships with most the militias from that city. As Libya’s biggest impediment to progress are its non-compliant militias, Bashagha would be best placed to deal with them. A civilian prime minister who lacks ‘’17 February revolutionary’’ credentials would receive more resistance from them and achieve much less compliance from militias and less progress along the DDR road (SSR – Security Sector Reform).