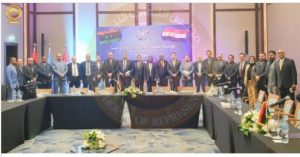 The joint House of Representative (HoR) and High State Council (HSC) Constitutional Committee has taken an historic step on moving forward with the necessary constitutional procedures needed to allow for Libya to hold constitutionally based elections on 24 December of this year.

They agreement was reached unanimously by the joint Committee yesterday at the end of its two-day meeting in Hurghada, Egypt.

The joint Constitutional Committee agreed to:

Progress on all Libyan UNSMIL-brokered tracks?

The progress by the joint HoR-HSC Constitutional Committee mirrors progress by the other UNSMIL-brokered Libyan dialogue tracks, including the military track by the 5+5 Joint Military Commission, the Economic Track, and the main political track through the 75-member LPDF.

Why have constitutional arrangements been stalled

Libya’s constitutional procedures have been stalled for years due to the political split in the country after the 2014 Libya Dawn Tripoli militia coup. The militia coup. that came just after the results of the parliamentary HoR elections were announced, forced the Abdalla Thinni caretaker government to flee to the east with the then newly-elected HoR.

A new unelected Government of National Salvation, not recognized by the international community, was formed by a rump of the outgoing parliament, the General National Congress (GNC).

The HoR accused Tripoli and western Libya of being under the control of Islamists and extremists and refused to continue the constitutional procedures – hence extending Libya’s interim period of limited legitimacy and authority from 2011 to 2021.

Why must constitutional arrangements be agreed jointly by the HoR and HSC?

The agreement by the joint HoR-HSC, prescribed by the 2015 Skhirat Libyan Political Agreement (LPA), entails that any Libyan constitutional agreement after the signing of the LPA must be agreed by both entities, who are also recognized by the LPA.

Why is the agreement important?

The agreement by the two, hitherto, squabbling bodies gives a great boost to a real possibility of the 24 December being held. The 24 December elections were agreed by the UNSMIL-brokered Libyan Political Dialogue Forum (LPDF) which insisted that elections should be held on a constitutional basis.

Why are elections held on a ‘‘constitutional basis’’ important?

By holding elections on a constitutional basis, the next Libyan government will no longer be referred to as an interim/transitional/temporary government. It will no longer have questioned legitimacy or reduced authority, and will have the full authority to act across all of Libya. This full authority would enabled the newly empowered government to take major and difficult decisions stalled due to limited legitimacy since the 2011 revolution that overthrew the Qaddafi regime.