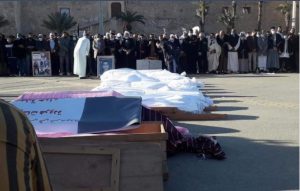 A funeral prayer ceremony was held Friday in Martyrs Square in Tripoli for 14 male and female victims of alleged massacres by the pro-Khalifa Hafter Kani family militia (Kaniat) recovered from mass graves in Tarhuna.

At one time the Kaniat were aligned to the Tripoli government, then suddenly they switched position and aligned themselves with Hafter to fight against the pro-Tripoli forces.

The families of the victims and others still missing in Tarhuna demanded that the United Nations, its Mission in Libya and the Security Council punish the murderers and hand them over to justice.

The Authority for Search and Identification of Missing Persons said that the 14 victims were identified by their relatives through their private possessions found with them after their bodies were recovered from the mass graves at the Rabt project in Tarhuna.

The Authority said that the number of victims discovered has reached 139 so far, distributed among bodies and body parts in 25 individual graves and 23 mass graves.