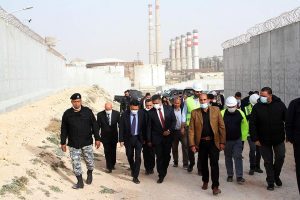 The General Electricity Company of Libya (GECOL) discussed Sunday (24 January) with the Korean ambassador and Korean power generation company Daewoo the return of Korean companies to Libya to complete their stalled projects.

During the site visit, the site, equipment and security situation of the project site were inspected in preparation for the start of negotiations to lifting the Korean ban on their companies to enable them to start work in Libya on their stalled projects.

These included the Tripoli West, Zweitina and Gulf projects, which GECOL seeks to complete to solve its electricity generation deficit.

GECOL stated that the most important of these is the Tripoli West Steam Station project with a capacity of 1,400 megawatts.